A new panorama of the X-ray universe 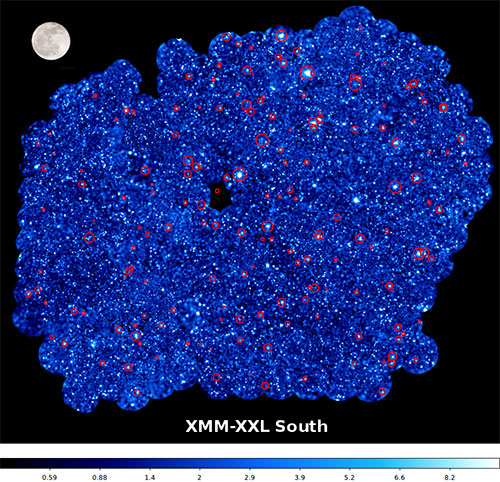 XMM image of the southern XXL panorama. This is one half of the full XXL survey; along with the northern field XXL is the largest view of the deep X-ray sky obtained to date. The size of the full moon is shown for comparison. Most of the bright X-ray sources seen in this image are active galactic nuclei (more than 12,000 have been detected in this image). The red circles show the clusters of galaxies that were found in this image and that were used for the investigation of the evolution of galaxy clusters. The XXL survey – S. Snowden, L. Faccioli, F. Pacaud

A panorama of the X-ray sky has been completed by an international team of more than 100 scientists, providing new insights into the nature of the Universe.

The XXL team, which includes astrophysicists from the University of Bristol, used the European Space Agency’s XMM-Newton X-ray observatory to take over 250 individual images of the sky.  These were then stitched together to create two panoramas of remarkable sensitivity, one for the northern and one for the southern sky.

The scientists used these deep XXL images to search for X-ray light from clusters of galaxies and from active galactic nuclei, supermassive black holes in the centres of galaxies.

Such galaxy clusters are amazing laboratories in which to study the way that cosmic structures – from black holes to galaxies to the clusters themselves – have grown and evolved since the Big Bang.

Moreover, their numbers and properties are sensitive to the conditions of the early universe and the details of its subsequent expansion.  This means that, by carefully selecting, measuring and counting clusters of galaxies, scientists can infer hidden details of the nature of the Universe (such as the behaviour of the ‘dark energy’ that currently drives the expansion of the Universe).

Astronomers in Bristol’s School of Physics have played a major role in the detection of galaxy clusters in the XXL survey, and have led the analysis of the X-ray light from the XXL clusters.

Nearly 500 clusters have been detected in the XXL survey, including some of the most distant currently known.  The light from these most distant clusters has been travelling to us for around 8 billion years which means that when we receive this light, we are seeing the Universe as it was at less than half its current age.

Bristol astronomers, Dr Paul Giles and Dr Ben Maughan have been comparing the properties of the most distant clusters to their nearby counterparts to investigate the evolution of clusters of galaxies over cosmic time.

Dr Giles said “An essential strength of the XXL survey is that the huge panoramic images it has produced can be used to search for clusters both near and far with the same techniques.  This means that we can be sure we are comparing apples to apples when we look for differences between them.

“Previous studies had suggested that distant galaxy clusters were not emitting X-rays as strongly as those clusters closer to us.  Our new results from XXL show that when we take careful account of the way that the clusters were chosen, this effect vanishes.  In fact, the distant clusters are surprisingly similar to their nearby counterparts, despite 8 billion years of cosmic evolution separating them.”

Dr Maughan continued: “This new result rules out models of the growth of structure in the Universe in which processes other than gravity have had a strong effect in the last 8 billion years.

“The XXL team are now working on combining the new results with cutting-edge computer simulations to develop models that can best explain the observed properties of these distant clusters.”

The first papers to be published by the XXL project will appear in a special issue of Astronomy and Astrophysics on 15 December.

The following papers were co-authored by scientists from the University of Bristol:

‘The XXL survey XIII. The baryon content of the bright cluster sample’ by Eckert et al