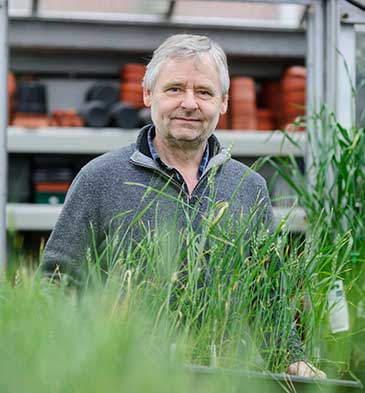 A consortium led by Bristol wheat geneticist Professor Keith Edwards has been awarded £3.68 million by the Biotechnology and Biological Sciences Research Council (BBSRC) for a major long-term study to increase the efficiency of wheat breeding.

The award is one of three high-value, long-term research projects totalling £13.9 million to have received funding under the BBSRC’s Strategic Longer and Larger grants (sLoLas) scheme, which gives world-leading research teams five years of funding and resources to address major challenges. The projects were chosen on the basis of their scientific excellence; because they require long timescales and extensive resources; and because they involve internationally leading research teams.

Keith Edwards is Professor of Cereal Functional Genomics in the University of Bristol’s School of Biological Sciences, and has received international recognition for his work using genomics-based technologies to identify, map, isolate, manipulate and express genes of interest to plant breeders.

The Bristol-led project, entitled ‘Releasing natural variation in bread wheat by modulating meiotic crossovers’, aims to improve breeders’ ability to generate high-yielding varieties of wheat able to withstand climate change. The consortium, which includes academics from Cambridge, Birmingham, Leicester and the John Innes Institute as well as wheat breeders from RAGT and KWS, will use a range of advanced molecular techniques to create new ways to breed elite lines of wheat.

Universities and Science Minister Jo Johnson said: ‘Government is investing in these long-term projects to help the UK's world-leading scientists find innovative and sustainable solutions that will boost food production across the country.’

‘As well helping the UK and the world to meet these challenges and offer economic and social benefit, the projects will develop the world-leading research capacity of the UK.’