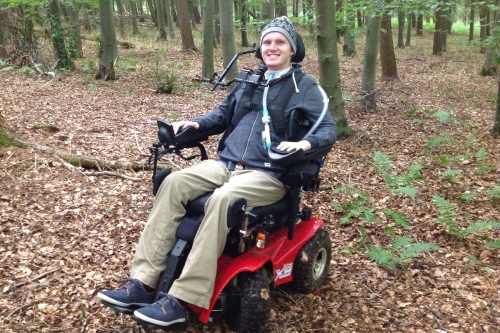 Rob Camm in Rex, his off-road electric wheelchair which he'll control with his chin when he takes part in the Tough Mudder 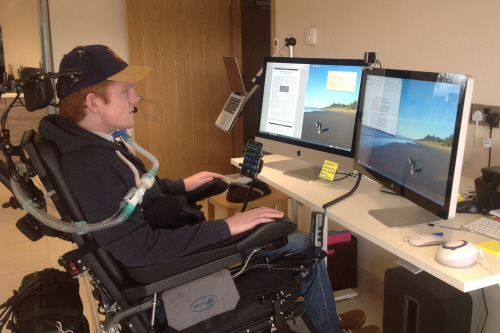 Rob using special technology to do his university work

Student Rob Camm will be the first tetraplegic in the world to take part in a Tough Mudder challenge – navigating the gruelling course on a special wheelchair which he controls with his chin. The 21-year-old, who studies politics and philosophy at the University of Bristol, was left paralysed from the neck down and is reliant on a ventilator after a car crash two years ago.

He’ll tackle the 12-mile Tough Mudder, dubbed ‘probably the toughest event on the planet’ by organisers, alongside a team of friends and family members in the Cotswolds on Sunday, 23 August.

They’re raising money for SpecialEffect, a charity which has provided technology to help him adjust to life after the accident.

His Extreme X8 wheelchair is an off-road electric wheelchair which can reach speeds of 10km per hour. Rob’s even been able to clear tree branches and tow his dad Ian’s 4x4 car with it.

Rob, who lives with his family in Breadstone, Gloucestershire, said: “I wanted to do a Tough Mudder before the accident and still want to do it now. I’ve got a wheelchair that’s capable of doing it, so I thought why not? It’s a wheelchair set on top of a quad bike and I’ve not found anything that can stop it yet.”

While Rob won’t be able to conquer some of the obstacles, he’ll need to navigate bumpy and muddy terrains during the challenge.

Almost £3,000 has been raised for SpecialEffect already, and Rob hopes his fundraising efforts will in turn help the charity to provide technology to even more disabled people.

It was while in Frenchay Hospital’s Intensive Care Unit for 96 days, staring at the ceiling, that SpecialEffect was able to offer Rob some hope in the form of an eye gaze computer. It’s controlled by blinking and eye movement and enabled him to reconnect with the world and do things for himself.

Determined to live his life to the full, he decided to continue his studies closer to home at the University of Bristol where he’s just passed his first year with a 2.1.

Rob added: “I’m enjoying my studies a lot. The University itself has been fantastic and my lecturers have been really supportive. It’s good getting my life back to some extent.”

Amazingly, Rob was able to walk a few weeks ago thanks to an electronic robotic exoskeleton which was being trialled at the Robotics Science and Systems Conference in Rome.

The wearable robot, called Rex, uses 79 electrodes attached to his skull which read signals in his brain and converts them to movement.

Rob said: “We got in touch with the developers initially as we thought the robot could help with physiotherapy as it’s good for my body to keep moving in a natural way. It’s now developed into this amazing skeleton which I can control with my mind.

“To see my toes and my feet move forwards was pretty incredible. For the past two years I haven't seen that really so it's very unusual and it's quite enjoyable to see your body moving in that way. I’ve said I’m happy to be their test pilot so we will see what happens in the future.”

You can read more about Rob’s story and follow his progress on his Cammpaign4rob blog.

Tough Mudder was co-founded by University of Bristol alumnus Will Dean​ (BSc Economics and Politics 2003) and Guy Livingstone in 2010. Dubbed 'Probably the Toughest Event on the Planet', each Tough Mudder endurance challenge tests participants’ toughness, fitness, strength, stamina, mental grit and teamwork. In 2015, Tough Mudder will host more than 50 events in countries worldwide.