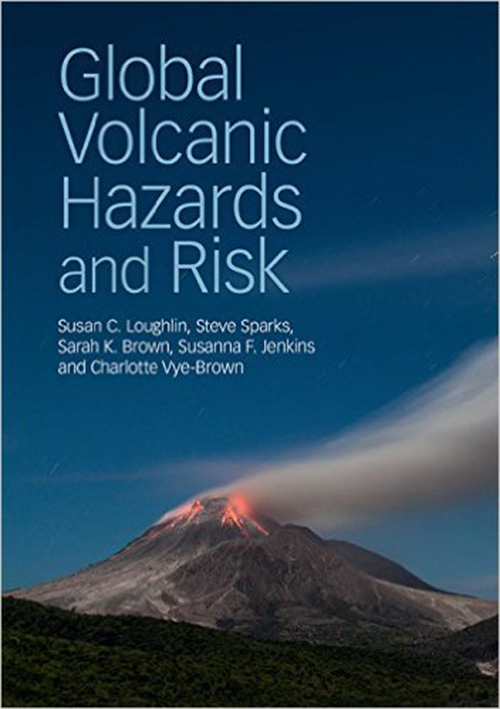 The book, co-edited by geologists from the British Geological Survey with contributors from nearly 90 institutions worldwide, was developed from a series of reports commissioned by the United Nations Office for Disaster Risk Reduction for the Global Assessment Report 2015.

The book is a huge step forward in compiling the current knowledge of volcanic hazard and risk.  It identifies where knowledge and data gaps are and how future research could help to reduce the threat of volcanic eruptions.

In the past four centuries nearly 280,000 people have died as a result of volcanic activity and millions more are thought to be at risk. The book shows that a staggering one tenth of the world’s population (around 800 million people) live within 100km of an active volcano.  Many more may be affected directly or indirectly by volcanic hazards, as Dr Brown remarked: “The 2010 eruption of Eyjafjallajökull in Iceland demonstrates that, given the right conditions, even a small eruption can have far-reaching consequences.”

This pioneering new book, which will be released as an open access e-book by Cambridge University Press, paves the way for focussed future research in areas where most is at stake.  It describes new measures of hazard and threat, and indicates that Indonesia accounts for about two thirds of the global volcanic threat because of its dense population and numerous active volcanoes.

In addition to the threat to life, volcanoes are becoming increasingly infamous for causing global disruption through their impact on industry, particularly the aviation industry.  Consequently the authors have included a section dedicated to the risk posed by volcanic ash, as Dr Jenkins explained: “We bought together our state-of-the-art understanding on how key sectors of society like public health, infrastructure, buildings, agriculture and the economy are impacted by, and vulnerable to, volcanic ash.”

As a consequence, the publication is an invaluable resource for addressing the volcanic hazards and risks posed to diverse communities around the globe.

The book is the result of a massive collaborative effort involving more than 130 scientists from around 50 countries.  Dr Brown said: “We couldn’t have produced the book without this massive community effort and we are very grateful to all those that provided their time and expertise.”

The breadth of knowledge channelled into the book reflects the exhaustive range of topics covered, making it the first collaborative global response to addressing volcanic hazard and risk.  It is hoped that the knowledge gained through compiling the book will aid better preparation by governments, NGOs, corporations and volcanologists for the inevitable risks that lie ahead.

Professor Steve Sparks and Dr Susanna Jenkins are members of the University of Bristol's Cabot Institute which carries out fundamental and responsive research on risks and uncertainties in a changing environment.   It drives new research in the interconnected areas of climate change, natural hazards, water and food security, low carbon energy, and future cities.  Its research fuses rigorous statistical and numerical modelling with a deep understanding of social, environmental and engineered systems – past, present and future. It seeks to engage wider society by listening to, exploring with, and challenging its stakeholders to develop a shared response to twenty first century challenges.