Lost protein could prevent hardening of the arteries 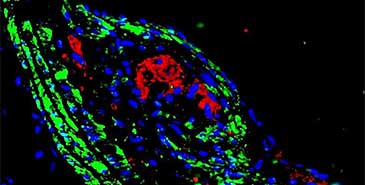 Researchers have found that when the protein matrix metalloproteinase-14 (MMP-14) is reduced or lost, white blood cells, known as macrophages, become good and could prevent hardening of the arteries, rupture and sudden death.

The study, led by Dr Jason Johnson, Senior Research Fellow in the University of Bristol’s School of Clinical Sciences, is published in Arteriosclerosis, Thrombosis and Vascular Biology and was funded by the British Heart Foundation (BHF).

Macrophages are important to the build-up of fatty material in the arteries that supply blood to the heart- a process known as atherosclerosis. Within these arteries the atherosclerotic lesions become weakened and crack, resulting in the formation of a blood clot and commonly a heart attack.

The researchers found that macrophages can be bad when they express a protein called matrix metalloproteinase-14 (MMP-14).  However, when MMP-14 is reduced or lost the macrophages become good and might prevent atherosclerosis progression, rupture and sudden death.

In addition, the team has discovered that this Jekyll and Hyde nature of macrophages is dictated by a growth factor called granulocyte/macrophage colony stimulating factor (GM-CSF), which consecutively controls a molecule (microRNA-24) that determines how much MMP-14 macrophages express. Using a microRNA-24 inhibitor in vivo, the researchers have shown that this novel node of macrophage signalling encourages atherosclerosis and their susceptibility to crack.

Dr Johnson said: “Our results support a proatherosclerotic role for GM-CSF and MMP-14 and suggest encouraging macrophage microRNA-24 as an effective strategy to slow down hardening of the arteries and heart disease.”