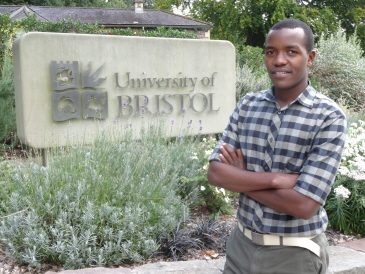 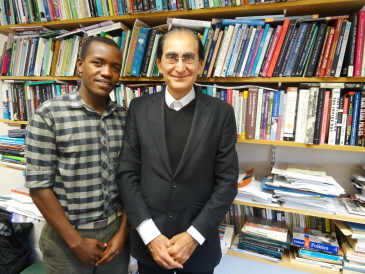 Starting university is a life-changing moment in most people’s lives, but for new student Hyppolite Ntigurirwa it really is a dream come true after surviving the Rwandan genocide 20 years ago.

The 27-year-old, who sadly lost his father and more than 80 relatives during the brutal conflict, will begin a Masters in Sociology at the University of Bristol next week.

The start of term is the next chapter in an unbelievable journey for the student, who hopes to return to Rwanda and use his education to help solve some of the social and ethnic divides which still exist in the African country.

Hyppolite was just seven-years-old when the genocide began in April 1994. In just 100 days, some 800,000 people were slaughtered in Rwanda by ethnic Hutu extremists.

He remembers hiding in the bushes for three months among dead bodies, hoping not to be seen by the violent extremists, many of whom he knew.

Hyppolite said: “My father was killed and given to the dogs to eat. We never had the chance to bury him.  Lots of my family died in the genocide. I knew some of the killers – some were neighbours, others were my family friends.”

His place at Bristol University is thanks to a relationship Hyppolite formed with Professor Tariq Modood – one of the country’s leading experts on the theory and politics of racism, racial equality, multiculturalism and secularism.

Having read Professor Modood’s research online and watching conferences on YouTube as part of his studies at the National University of Rwanda, Hyppolite emailed him to enquire about the possibility of studying in the University’s School of Sociology, Politics and International Studies.

This triggered a complex process to get funding, visas, transport and accommodation sorted ahead of the new term.

What initially seemed an impossible task was given impetus by Professor Modood’s wife, Glynthea, who generously suggested that Hyppolite stayed with them.

Given the compelling circumstances, the University was able to cover Hyppolite's tuition fees and, through a long-standing endowment fund to assist international students, provided £10,000 for his living costs.

Fees for Hyppolite to complete an intensive English language course over the summer, which he passed with flying colours, were waived by the Centre for English Language and Foundation Studies.

Hyppolite, whose mum and five siblings still live in Cynangugu in Rwanda, said: “I had dreamed of studying at a great university abroad and felt that Professor Modood’s work would be very helpful in my region, where there are still ethnic divides.

“I emailed him one day to enquire about the course. I didn’t have high expectations so was very happy and excited when he replied. It’s an unimaginable opportunity for me and I hope to eventually complete a PhD and become a professor in Rwanda, contributing to social research which will one day help my family and community.”

Bristol University and Professor Modood have set up a Survivor Bursary to help fund students in the future who might be in a similar position to Hyppolite.

Professor Modood, who was awarded an MBE for services to social sciences and ethnic relations in 2001, said: “We’ve set up the Survivor Bursary so Hyppolite could be the first rather than the last recipient. Initially I was worried that it would be too difficult for Hyppolite to study here due to the logistics and costs involved but everyone has worked together to make it happen. We’re delighted he’s here and able to pursue his passion for Sociology and desire to make a difference.”