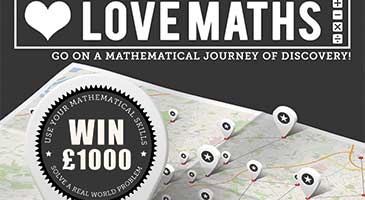 For the second year running students from Wycombe Abbey School, High Wycombe, are celebrating after being announced as winners of the University of Bristol Engineering Mathematics Challenge, a nation-wide competition for final year school students.

The students, Kristina Belyakova, Karen Hsu, and Winnie Yap, together with their maths teacher Dr Jen Ryder, will be at the University today [Tuesday 16 September] to collect their prize of £1,000.

Dr Thilo Gross, the Challenge Co-ordinator from the Department of Engineering Mathematics, said: ““It was a close race this year. We had some very high-quality entries and many teams came up with fantastic ideas.”

Kristina Belyakova, Karen Hsu, and Winnie Yap from Wycombe Abbey School, added: “Researching and applying new and exciting mathematical models that we have not studied before was incredibly enjoyable to all of us.

“One of the biggest difficulties that we encountered was that we had to exclude many locations from our plan so that a realistic amount of time could be spent in each location.“

This year’s challenge asked the participants to find the optimal route for a tourist who wants to visit 91 locations in Bristol during a seven-day stay and Dr Gross not only checked the winning team’s calculations but also “tested” the seven suggested day trips by walking them as one single 30-mile tour.

Dr Gross said: “The challenge immediately gave you an idea what maths was needed, but then there were the complications, in the end much creativity was needed to make it all work - that’s what made it feel real.”

The maths in question was that of the travelling salesman problem. The problem originally refers to a salesman who has to visit a number of customers and wants to minimise the travel distance between them.  The problem has a long history in mathematics, and although there is no definitive way for finding the optimal solution, many different solution strategies that can yield near-optimal results are known.

Dr Gross explained: “It is one of those problems that crops up all over the place, not only in the routes of salespeople and tourists but also, for instance, in the design of microprocessors and circuit boards.”

One of the complications intentionally built into the Bristol version of the challenge was that the list of 91 locations was too long and some of the locations were too far away to visit them all on foot.

Dr Gross said: “The most important thing in mathematically modelling is to keep your eyes open.  In this challenge the students had to realise that there was a problem with the 91 locations and then find an appropriate solution.”

Some groups solved the problem by integrating bus travel into the route, which led to the next mathematical challenge of how to best organise walking around the rigid bus schedule. Other groups came up with ingenious algorithms for ranking the locations to decide which ones to visit and which ones to skip.

Once a list of destinations had been pruned down, the students faced other challenges: breaking the destinations into daily tours, determining the optimal order in which they should be visited, deciding how long to stay at the individual sights, and finding the hotel that would provide the best starting point.

The result was a complex puzzle with many individual obstacles that needed to be overcome on the way to the solution.

The winning team, Wycombe Abbey School, High Wycombe, will be attending the awards ceremony in Bristol on Tuesday 16 September together with Hardenhuish School, Chippenham and Stroud High School, Stroud, who will be awarded highly commended for their solutions and the runners-up from Aquinas College, Stockport; University College School, London; The Radcliffe School, Milton Keynes and Upton Court Grammar School, Slough.

For more information about the challenge, visit: http://www.bris.ac.uk/engineering/departments/engineering-mathematics/competition.html

A video of the winning solution walked by Dr Gross is available to view at https://drive.google.com/file/d/0B-ndXQd1WJzVM0xmcFZCVGo2cjA/edit?usp=sharing

About the Department of Engineering Mathematics

The Department of Engineering Mathematics is a vibrant department with a strong international reputation for teaching and research into real-world applications of mathematics. It is the only mathematics department in a Russell Group university based in an engineering faculty, which gives the department unrivalled access to a wide range of industrial collaborations.