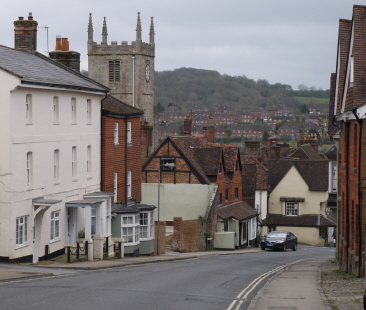 Marlborough in 2014 with pillbox and strong point still visible 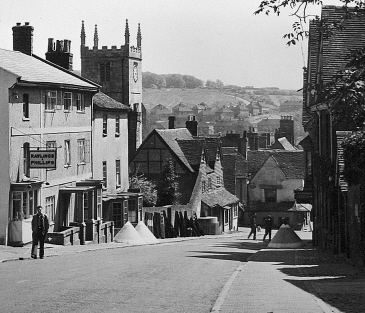 1940s Marlborough showing concrete pimples, pillbox, strong point and bent rails resting against the wall, ready to be inserted in the road at short notice. The Merchant’s House Marlborough

A Wiltshire town’s unusual role in the Second World War as a ‘Tank Island’ has been explored in recent research.

In the first detailed archaeological work of its kind, Mike Relph, who is reading for an MA in Archaeology (Modern Conflict Archaeology) in the Department of Archaeology and Anthropology, discusses Marlborough as a case study.  In it, he explores the military strategy around the layout and fortification of a Tank Island, and the experiences of those living there during the Second World War.

Marlborough was chosen in 1940 as one of three ‘Anti-Tank Islands’ in Wiltshire – a name that quickly became shortened to Tank Island.

Tank Islands were towns located along the route that an invading German army was expected to take, with orders to hold the advancing army back for seven to 10 days.

Given the Germans’ Blitzkrieg method of fighting, which involved moving as quickly as possible through the country they were invading, the presence of a Tank Island would cause them to change direction rather than lose time fighting in one particular town, allowing the British troops to engage and strike them elsewhere.

In Marlborough, fortifications were created in the form of road and railway blocks, defended strongpoints and pillboxes.

Roadblocks were formed by cementing large concrete ‘pimples’ on to the pavement to stop vehicles and slots were dug in the road into which bent railway tracks could be fitted.  These were designed to lift any tanks that tried to drive over them so that their vulnerable underside would be exposed.

The people of Marlborough played their part in preparing to defend the town, with 300 members of the Home Guard and older boys from Marlborough College being joined by 200 regular troops.

For the boys, this meant studying during the day and working night shifts with the Home Guard three or four times a week.

Although we know now that a German invasion was unlikely, the people of Marlborough lived in a constant state of readiness, with the belief that it was not ‘if’ the Germans invaded, but ‘when’.

Some of these wartime fortifications can still be seen in Marlborough today, with defensive pillboxes, strongpoints and, on one building, what local legend says is the damage left by an out of control tank.

Mike Relph said: “This exciting archaeological study has added new insight into the actions taken by those tasked with defending Marlborough against German invasion in the early 1940s, and into the personal experiences of those who unexpectedly found themselves on Britain’s front line”.

The research will be presented at the Modern Conflict Archaeology Conference, on 18 October, which is being held at the Department of Archaeology and Anthropology, University of Bristol.