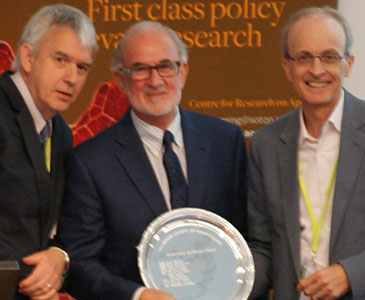 The award is made annually to an individual or organisation that, in the opinion of the judges, has made a significant and lasting contribution to social gerontology in the UK.

Professor Johnson is a long-standing member of the Society, and was instrumental in transforming it from a small-scale network of academics into an international learned society.

His influence on social gerontology has been widespread. He produced a number of courses in gerontology at the Open University during the 1980s and 1990s, helped to establish the highly respected journal Ageing and Society, and edited the Cambridge Handbook on Age and Ageing in 2005, among many other achievements.

For further details, see the Society’s own news item about Professor Johnson’s award.