The Birth of Hedonism 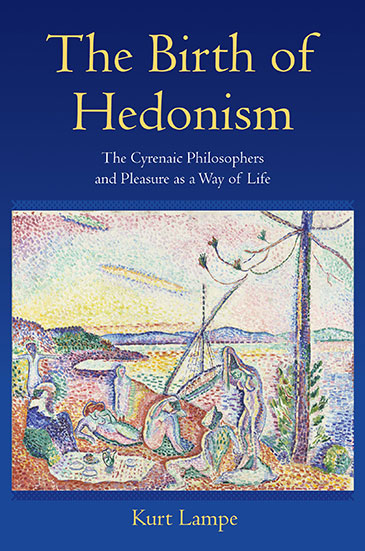 A new book exploring hedonism and the Cyrenaic philosophers by Dr Kurt Lampe of the Department of Classics and Ancient History is published this week.

The Birth of Hedonism: The Cyrenaic Philosophers and Pleasure as a Way of Life reconstructs the doctrines and practices of the Cyrenaics, an ultra-hedonist Greek school of philosophy supposedly founded by Aristippus of Cyrene in the fourth century BCE.

Before the rise of the better known but comparatively ascetic Epicureans, the Cyrenaics pursued a way of life in which moments of pleasure, particularly bodily pleasure, held the highest value.  Yet, contrary to recent scholarship, the book also shows that the Cyrenaics, despite giving primary value to discrete pleasurable experiences, accepted the dominant Greek philosophical belief that life-long happiness and the virtues that sustain it are the principal concerns of ethics.

In The Birth of Hedonism, Kurt Lampe provides the most comprehensive account in any language of Cyrenaic ideas and behaviour, revolutionizing the understanding of this neglected but important school of philosophy.

The book examines not only Aristippus and the mainstream Cyrenaics, but also Hegesias, Anniceris, and Theodorus.  Dr Lampe also offers the first in-depth effort to understand Theodorus’s atheism and Hegesias’s pessimism, both of which are extremely unusual in ancient Greek philosophy and which raise the interesting question of hedonism’s relationship to pessimism and atheism.

Finally, the book explores the ‘new Cyrenaicism’ of the nineteenth-century writer and classicist Walter Pater, who reinvented the philosophical interest of Cyrenaic hedonism more convincingly than any other modern thinker.

Dr Kurt Lampe is a lecturer in the Department of Classics and Ancient History at the University of Bristol.  His principal research interests include Homer, Greek tragedy, and Hellenistic and contemporary European philosophy.  He is currently working on two projects, one on Stoicism and contemporary European philosophy, and the other on the Orestes myth as a vehicle for working through issues of selfhood, intersubjectivity, practical reasoning, agency, responsibility, and their cosmic dimensions.

The Birth of Hedonism: The Cyrenaic Philosophers and Pleasure as a Way of Life is published by Princeton University Press, £30.95