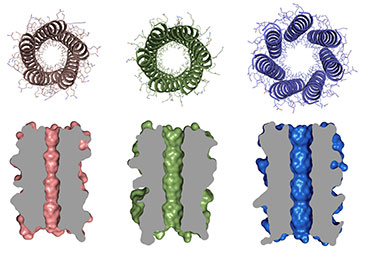 Orthogonal views of 5-, 6- and 7-helix barrel proteins created by Drew Thomson, Dek Woolfson and colleagues that show the central channels in these structures to which the team aim to add functions in future Woolfson group, University of Bristol

Designer proteins that expand on nature’s own repertoire, created by a team of chemists and biochemists from the University of Bristol, are described in a paper published this week in Science.

Proteins are long linear molecules that fold up to form well-defined 3D shapes.  These 3D molecular architectures are essential for biological functions such as the elasticity of skin, the digestion of food, and the transport of oxygen in blood.

Despite the wide variety of tasks that natural proteins perform, they appear to use only a limited number of structural types, perhaps just a few thousand or so.  These are used over and over again, being altered and embellished through evolution to generate many different functions. This raises the question: are more protein structures possible than those used and presented to us by nature?

A team from Bristol’s School of Chemistry and School of Biochemistry, headed by Professor Dek Woolfson, have addressed this by designing manmade protein molecules from scratch.

Although the design principles used are learnt from natural proteins, from which the team develops rules for assembling their proteins, some of the designed protein shapes are completely new and have not been observed in nature yet.

Specifically, the scientists have made proteins with central cavities, or channels, running through them [see image for download below].  The team believes that these will be useful in designing new protein functions, such as catalysts for breaking down fats, or molecules that span cell membranes to allow new communications between cells.

Professor Woolfson said: “This is a really exciting time to be exploring what can be done with biological principles and building blocks to make new and useful molecules, but completely outside the context of biology itself.  It is one aspect of the emerging field of synthetic biology, in which Bristol is taking a lead both nationally and internationally.”

It is part of the growing effort in the new field of synthetic biology at the University of Bristol, which has recently been awarded £13.5 million to establish BrisSynBio, a BBSRC/EPSRC-funded Synthetic Biology Research Centre.