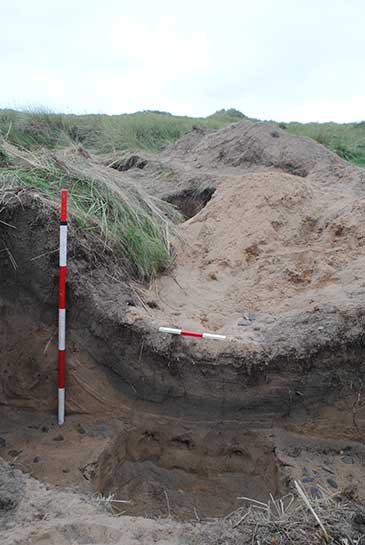 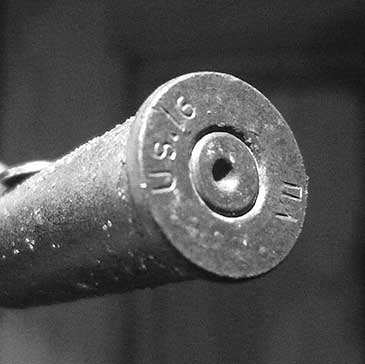 One of a small assemblage of .303 shell cases that were manufactured in America

Excavations and surveys of the First World War practice trenches on Walney Island on the western coast of Cumbria have been carried out by a team of archaeologists from the University of Bristol.

As part of a Heritage Lottery Fund community project, established by internationally-renowned, artist-led company Art Gene Associates, Bristol archaeologist Dr George Nash and former Bristol MA graduate and professional archaeologist Thomas Wellicome trained volunteers to excavate two trenches over the western part of a practice trench system that is believed to date from the early months of World War I.

The practice trench system is located close to the Cumbrian coastline within the northern part of Walney Island, near the naval shipyards of Barrow-in-Furness. Within the vicinity of the practice trenches are further military installations that include a World War I rifle butts and range, World War II moving target range and RAF Walney, which was established as a gunnery school and airfield in late 1941. Currently, the trenching system stands within a National Nature Reserve, managed by Natural England.

Dr Nash said: “In many ways the military history of Walney Island is still very much an enigma. Researchers are faced with limited documentary evidence, Ordnance Survey map embargoes between 1916 and 1985, and little in the way of surviving above-ground archaeology.”

The field survey has now completely mapped out the crenulated earthwork, along with previously unrecorded trench sections and features which stand to the south. Much of the newly-discovered trenching was uncovered during the walkover survey by volunteers.

The archaeologists also conducted an earthwork survey of the World War I trenching and World War II gun range which will be used by Art Gene in the development of a planned augmented-reality mobile phone app to help visitors better understand this poignant military landscape.

The excavation revealed the outline of the trench edges and base but any timber or metal shoring that propped up the trench system had long-since gone. An array of artefacts that were, not surprisingly, associated with military activity, were discovered including numerous .303 bullet-head and the occasional shell case. Analysis has shown that these items date to 1915/16 and were made in America. Also found was a British coin that dated to around 1840: had this coin accidentally fallen out of the pocket of a soldier?

By chance on the last day of the excavation, local resident Andrew Bolton showed the team several photographs of his grandfather, 43894 Private Hugh Thomas of the Royal Welsh Fusiliers, in uniform. Mr Thomas was one of many soldiers to use the practice trenches on North Walney between July 1916 and January 1917 prior to being sent to the Western Front to fight at Passchendaele and the 3rd Battle of Ypres that year.

Dr Nash said: “This is probably the closest we can get to the horrors of early modern warfare. Based on the limited finds and artefacts shown to the team, the practice trenches on North Walney were a busy place with conscripts and professional soldiers learning how to use shallow trenching, especially prior to 1916 when battle field tactics began to change forever with trench warfare becoming a three-year stalemate along the Western Front.”

It is hoped that the outcome of this project will further interest the people of Walney and neighbouring Barrow-in-Furness to further explore their own back yards. Judging by the positive comments made by bystanders over the duration of the excavation, it is clear that there is more to learn about this fascinating and unexplored corner of Cumbria.

The Art Gene team are indebted to Cumbria’s Archaeology Service for providing invaluable Historic Environment Record and English Heritage project information about this corner of the North-west.