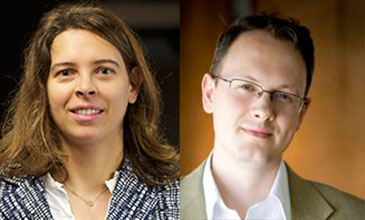 Two Bristol researchers have been awarded 2014 Philip Leverhulme Prizes in recognition of their early-career achievements and exceptional promise.

Dr Corinna Ulcigrai in the School of Mathematics receives a 2014 Philip Leverhulme Prize for Mathematics. Her research is in ergodic theory and Teichmueller dynamics, specifically the dynamics in moduli spaces of flat surfaces and in ergodic theoretical problems related to number theory and diophantine approximation.

Dr David Trippett in the Department of Music receives a 2014 Philip Leverhulme Prize for History. His research combines historical musicology with the history and philosophy of science, and he is currently studying 19th-century conceptions of sound and music in the context of technological change.

The Philip Leverhulme Prizes recognise the achievement of early career researchers whose work has already attracted international recognition and whose future career is exceptionally promising. The prize scheme makes up to 30 awards of £100,000 a year, across a range of academic disciplines.