PhD student named as NMI Young Engineer of the Year 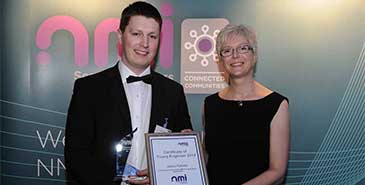 James Pallister being presented with his award by Monika Biddulph, General Manager at ARM

A PhD student from the University of Bristol has been awarded the Young Engineer of the Year award 2014 by the National Microelectronics Institute (NMI), the UK electronics industry association.

James Pallister from the Department of Computer Science won the award following his work on energy-efficient computing.  James’ groundbreaking research has found a way to reduce the power consumed by computers by as much as 65 per cent, while improving their performance at the same time and without having to physically modify them.

James combines his studies with working as a Compiler Engineer at Embecosm Ltd. He is taking full advantage of this association, performing high impact engineering at the leading edge of research, which has benefitted both organisations.  James’ high-profile work has helped Embecosm to become the market leader in compiler technology for low energy and his research is already being commercialised by the company.

Dr Kerstin Eder, Reader in Design Automation and Verification in the Department of Computer Science, said: “I am delighted James has won the NMI Young Engineer of the Year Award.  James performs world-class research and his work has gained international recognition.  He has repeatedly demonstrated the remarkable ability to quickly grasp complex concepts, to conduct thorough investigations and to turn the understanding he has gained into innovative solutions.”

Dr Jeremy Bennett, Chief Executive Officer at Embecosm, commented: “We are delighted at James’ success in winning such a prestigious national award. At a young age he is already one of the world’s leading experts in the field of energy efficient computing, and the practical application of his research has been central to Embecosm’s commercial success.”

James was presented with his award at a ceremony in London last week by Monika Biddulph, General Manager at sponsor, ARM Holdings, the British company whose chip design powers virtually all the world’s smartphones.

About Embecosm
Embecosm develops open source software tools for many of the world’s largest silicon chip companies. Headquartered in Lymington, it is internationally renowned for its expertise in creating software which minimizes the energy used by computers.

About NMI
NMI is the active industry association representing the UK Electronic Systems, Microelectronics and Semiconductor Communities. It aims to be the home for the many and diverse sectors of the UK’s electronic systems industry. NMI is the go-to organisation addressing the common challenges including skills provision, R&D funding, manufacturing excellence, design productivity, innovation, employment, advocacy and representation.