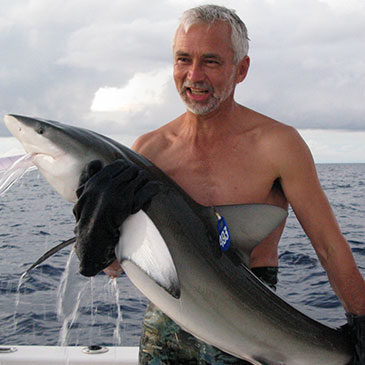 Bristol alumnus Neil Burnie (BVSc 1977), an internationally renowned vet and founder of the Bermuda Shark Project, died earlier this month in a tragic marine accident. His friend Robin Revell pays tribute to ‘the most unusual of veterinary surgeons’.

On 16 November 2014, dozens and dozens of boats, large and small, left Albouys Point in Bermuda heading out on to the ocean. Hundreds of people had gathered to celebrate the extraordinary life and times of Neil Burnie, ocean wildlife preservationist, fisherman, diver, musician, windsurfer, triathlete, free spirit, Bermudan national treasure – and much-loved vet. They then committed his body to the sea where he spent so much of his truly exceptional life.

And what a life! Even Bermuda’s Premier Michael Dunkley extended his condolences, saying: ‘I have known Neil for many years, and this is an especially tragic loss. Neil will always be remembered as a person who had an immense love for our natural world.

‘He was passionate about preserving our oceanic wildlife and our environment and his advocacy will be truly missed. He was a man who embraced all that life had to offer, an adventurer at heart, and a man who touched so many lives.’

I couldn’t have put it better myself.

I first met Neil as a teenager. We were on a pre-course visit to Bristol Veterinary School in 1972. As might be expected we were a fairly bookish group, somewhat overawed by the surroundings. One would-be vet student stood out though – a confident, somewhat brash, long-haired biker who seemed full of excitement at the opportunities Bristol (and life) were soon to offer him. Other than the hairstyle, I am not sure anything about Neil changed from that day on.

He was to become a lifelong friend. His student colleagues from 1972 to 1977 will recall a seriously relaxed student who seemed more wedded to his harmonica and saxophone than his studies in the pre-clinical years. He came to Bristol as an excellent flautist. But, despite doing a more than passing impression of Jethro Tull front man Ian Anderson, Neil soon realised a more glamorous instrument was needed as he embraced Bristol’s club culture and music scene. So he taught himself to play the saxophone to a very high standard in weeks.

A skilled fly fisherman, which was unusual back then for a Solihull schoolboy, Neil introduced me to fly fishing. We made many visits to Blagdon Lake which often involved terrifying rides on the back of his motor bike, with me grimly clutching on to fishing tackle I would hope to still be alive and able to use on arrival. In return I introduced Neil to the more prosaic pastime of pike fishing on the bitterly cold English Fens. This apex predator of the British waterways may have sparked his intense passion for ocean predators – and in particular sharks.

As the clinical years approached, Neil became much more immersed in his vocation, but still found time for his music and much extra-curricular activity – he was rarely separated from his harmonica and saxophone.

Graduating in 1977, his gregarious nature and extrovert personality made him an excellent veterinary surgeon. He began his career in practice in Malmesbury, before his thirst for exploration and adventure took him overseas – first to Canada, then to Bermuda, firstly as a government vet and then at the Endsmeet Animal Hospital where he went on to be a managing partner.

Once in Bermuda, Neil found his true home. It was here he met the love of his life, his wife Katrin, and they settled into an idyllic life within sight of the ocean that was to become such a passion. A keen fisherman, Neil bought a boat soon after arriving in Bermuda. True to his character, he used its first outing as an opportunity to set a new speed record between New York and the island.

He also became an excellent windsurfer and keen triathlete, often helping to organise and take part in the island games. He threw himself into island life and was often to be seen simply playing his saxophone barefoot in the streets.

However it was his love of the ocean and interest in tiger sharks that will prove his most lasting legacy – and saw him become the self-styled Ocean Vet. Typically Neil threw all his energy into what was to become a passion. He built his own shark cage, though he rarely felt the need to use it. In 2005, together with Choy Aming, Neil founded the Bermuda Shark Project. This started on an almost DIY basis, tagging tiger sharks to track their migration. It expanded quickly using sophisticated satellite technology in partnership with prestigious universities to reveal new knowledge of the huge distances and ocean highways these apex predators travel.

The photos and film of Neil free diving with tiger sharks, and even hitching a lift with them, have spread around the world on the internet. Neil also spoke (and sang) passionately about his subject, bringing new understanding to the much-maligned shark and the ocean environment.

Ultimately his extraordinary work attracted the world’s media. His personality and presence made him a natural in front of the camera, and a breakthrough new television series, Ocean Vet, has been created which will soon be broadcast to a global audience.

It was when putting some finishing touches to filming that Neil had his tragic accident. His day’s work was done, but characteristically, he chose to go off on his own and help others and the ocean wildlife. He was free diving in 60 feet of water, to untangle local fishermen’s lobster pots caught up on the reef after the ravages of Hurricane Gonzalo, when he drowned.

In recent years I saw Neil perhaps once a year, usually at 24 hours’ notice (or less) for a fishing trip.  Yet his passing has left a huge hole in my life. I cannot imagine the loss his family are experiencing. Neil was the most unusual of veterinary surgeons – a man who made his mark not just on all who knew him, but also on the nation he lived in, and the ocean that surrounds it. The world is a much quieter place for his passing.