Concerns raised over inclusion plans for Gypsies, Roma and Travellers 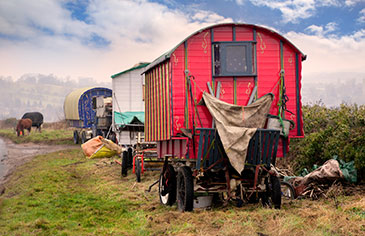 The UK government is failing in its inclusion plans for Roma, Gypsy and Traveller communities, according to a new report by researchers from the University of Bristol which will be launched in the European Parliament on Tuesday [2 December].

The UK Civil Society Monitoring Report on progress achieved within the EU Framework for National Roma Integration Strategies (which includes Gypsies, Travellers and Roma) will be launched at an event hosted by Soraya Post, a Swedish Roma Member of the European Parliament.

Dr Ryder said: “I was truly shocked at just how much Gypsy, Roma and Traveller communities are now suffering: not only do they remain one of the most vulnerable groups in society but advances made in recent years are being lost.

“Whilst Wales and now Scotland are following EU Commission advice and developing a strategic approach, England and Northern Ireland are not.

“In England the inter-ministerial working group on Gypsies and Travellers has not met in two years despite receiving, in 2012, a very negative assessment from the EU Commission as to the effectiveness of its plans to raise inclusion for these communities.

“The EU assessment should have been a wake-up call.  The UK Civil Society Monitoring Report indicates the Government is not listening to the good advice it has received from the European Commission and Gypsy, Traveller and Roma communities.”

Speaking on behalf of the NFGLG, Siobhan Spencer MBE said: “The way a government acts towards its minorities is the true indicator of its moral values.  Yet for centuries discrimination has deprived Gypsy, Traveller and Roma people from full and equal citizenship.  Now is the time for the UK Government to commit to effective action for change.”

Speaking on the report, Dr Cemlyn said: “The monitoring report was project-managed by a Gypsy and Traveller community organisation (National Federation of Gypsy Liaison Groups) and the research team involved Gypsies, Travellers and Roma (GTR) as interviewers.

“The report has been well received, praised by the Institute for Race Relations, and demonstrates the effectiveness of research that is participatory and works inclusively ‘with’ rather than ‘on’ GTR communities.

“Inclusive approaches to research need to be more strongly promoted within the EU Framework for National Roma Integration Strategies to assess and monitor progress.”

The reports will be launched at ‘Cohesion for All’ on Tuesday 2 December 2014 in the European Parliament.

The EU established the Framework for National Roma Integration Strategies in 2011 and has encouraged EU Member States to develop National Action Plans to raise inclusion for Roma, Gypsy and Traveller communities with an emphasis on dialogue and participation.  The Westminster Government established an Inter-ministerial Working Group on Gypsies and Travellers. Officials refused to answer a freedom of information request as to how often it meets, this was overruled by the Information Commissioners Office.  It appears that the Inter-ministerial Working Group has not met since April 2012.