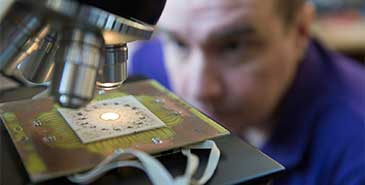 A team of researchers from the Universities of Bath, Bristol and Dundee has discovered for the first time that ultrasonic waves can be used to grab several microparticles at a time, effectively creating a pair of invisible ‘ultrasonic hands’ that can move tiny objects, such as cells, under a microscope.

Using tiny plastic spheres the size of biological cells, they found that objects could be moved along independent paths and then carefully brought together.

These capabilities provide new tools to study cells which could help biologists or medics perform a variety of delicate tasks such as sorting or assembling cells into patterns for tissue engineering, stem cell work and regenerative medicine.

Dr Charles Courtney from the University of Bath’s Department of Mechanical Engineering and one of the paper’s authors, said: “We have shown that sophisticated microparticle manipulation is possible using a relatively simple desktop apparatus that can be used with a standard microscope system. We believe this has the potential to radically improve results in bioscience labs where pinpoint positioning of cells is a useful research tool.”

Bruce Drinkwater, Professor of Ultrasonics from the University of Bristol’s Department of Mechanical Engineering, added: “It is currently a big challenge to move tiny things like cells around under a microscope. Our ultrasonic hands can grip and move micoscopic cells without damaging them. There are a huge number of applications for this technology.”

Using a specially developed array of 64 ultrasonic loudspeakers the researchers were able to generate the complicated patterns of ultrasonic waves needed to create up to three separate particle traps, small regions to which particles are confined by the sound field, and move those traps independently of each other. The traps are formed using acoustic waves to create very small vortices or whirlpools of sound which pull in and hold the objects in place. The positions of these whirlpools can then be adjusted by controlling the output of an array of tiny loudspeakers. Using this concept, particles were first moved and then brought together by creating a large whirlpool and shrinking it to capture the particles.

This research has been funded by the Engineering and Physical Sciences Research Council (EPSRC) through the Electronic Sonotweezers programme.