Keeping active pays off even in your 70s and 80s 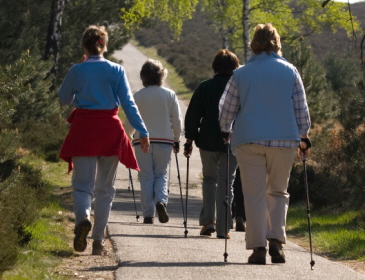 Older people who undertake at least 25 minutes of moderate or vigorous exercise everyday need fewer prescriptions and are less likely to be admitted to hospital in an emergency, new research has revealed.

The findings, published in the journal PLOS ONE today [28 May], reinforce the need for exercise programmes to help older people stay active. It could also reduce reliance on NHS services and potentially lead to cost savings.

In the first study of its kind looking at this age group, researchers from the University of Bristol looked at data from 213 people whose average age was 78.

Those who carried out less than 25 minutes of moderate to vigorous physical activity per day – such as walking quickly, cycling or swimming - received 50 per cent more prescriptions over the following four to five years than those who were more active.

Such physical activity leads to a higher metabolism and better circulation, reducing the risk of conditions and diseases common in older age such as high blood pressure, type 2 diabetes, coronary heart disease and strokes.

The study also found that being physically active reduced the risk of unplanned hospital admissions. Those who were in the most active third of the sample were on average achieving 39 minutes of moderate-to-vigorous activity and were at half the risk of emergency hospital admissions than those in the low active group.

These results remained significant even when other factors affecting health were taken into account, such as socio-economic status, education, weight, existing disease and level of physical function.

Medical records were then examined to investigate health service usage over the next four years.  This captured visits to primary care, referral for secondary services, unplanned admissions to hospital and the number of prescriptions needed.

Being active was not associated with the frequency of visits to the doctor, or referral for other hospital services.

The research was co-authored by Dr Bethany Simmonds and Professor Ken Fox, from Bristol University’s Centre for Exercise, Nutrition and Health Sciences, within the School for Policy Studies.

Dr Simmonds, now based in the School of Clinical Sciences, said: “We know that leading a physically active life has health benefits for all ages, but this study suggests there may also be economic benefits by reducing reliance on medication and preventing costly emergency hospital admissions. Our findings further support the need for greater availability of community-based programs to increase physical activity and prevent loss of lower limb function.”

The results support the recent recommendations from NICE that all GPs should encourage physical activity in their older patients.

Exercise should be targeted and tailored to those in their 70s and 80s, aiming to increase muscle strength, balance, coordination and aerobic fitness to maintain mobility and prevent falls and further disease.

Professor Ken Fox added: “Until now, very little has been known about the value of physical activity in later life, particularly when people are in their 70s and 80s. This research underlines that keeping older people active brings a whole range of health benefits, as well as reducing reliance on the NHS and potentially leading to major cost savings.”

The study was part of the OPAL-PLUS project, supported by The Dunhill Medical Trust [grant number: R200/0511] with additional support from the Avon Primary Care Research Collaborative and the South West General Practice Trust. Researchers at the University of Bristol worked with colleagues at the University of Bath and UWE Bristol.

About The Dunhill Medical Trust

The Dunhill Medical Trust is a grant-making charitable company limited by guarantee (company no. 7472301; charity no. 1140372).  DMT welcomes high quality grant applications which fall within its charitable objects, particularly those within the following areas: care of older people, including rehabilitation and palliative care; and research into the causes and treatments of disease, disability and frailty related to ageing.

The Dunhill Medical Trust is a member of the Association of Medical Research Charities (AMRC) and a recognised charity partner of the National Institute for Health Research (NIHR).