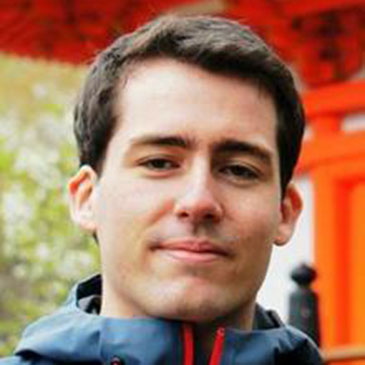 Guillaume Francois, a PhD student in the Centre for Doctoral Training in Advanced Composites for Innovation and Science (ACCIS CDT), has won the Institution of Mechanical Engineering Western Aerospace Centre (IMechE WAC) Prize.

Guillaume won the prize following his presentation, entitled ‘Novel Designs of Composite Wings’, given in May to the WAC committee. The award comes with a cash prize of £500, and the four finalists also get to spend a day with the Red Arrows later in the year.

The purpose of the prize is to encourage the further professional development of young engineers living and working in the West of England and South Wales, following graduation with a first degree. The competition places a strong emphasis on both the impact of the work carried out and the ability to communicate well.

The work presented by Guillaume, supervised by Professors Jonathan Cooper and Paul Weaver, covered the initial study he undertook as part of his PhD researching the shape optimisation of internal wing structures in order to reduce weight and improve aircraft performance.

Guillaume’s work looked in particular at controlling the interaction between the structure and the aerodynamics (aeroelasticity) so as to reduce structural weight, increase the flutter / divergence onset speed, reduce gust loads, and tailor wing deformations during flight to reduce drag. The aim of such work is to improve aircraft fuel efficiency so as to tackle the combination of rising fuel prices, environmental concerns and the demand for air travel.

Having established the effectiveness of the method he studied, Guillaume will devote the remainder of his PhD research to their application to representative aircraft designs, leading to reduced weight and improved performance. This work will develop technologies to make significant improvements in future aircraft design.

The research is funded by the EPSRC under the Centre for Doctoral Training in Advanced Composites for Innovation and Science (EP/G036772/1) at the University of Bristol.

The utilisation of composites is growing at an unprecedented rate, as illustrated by the significant UK technological contribution to both the Boeing 787 and Airbus A350 with composite airframes, the need for rapid development of renewable energy (wind turbine blades) and the nascent interest in large-scale production of automotive components by organisations such as BMW. Overall, industrial usage is within a period of exponential rise. Such exciting examples of new technologies require unprecedented interdisciplinary and multi-scale approaches.

The Centre for Doctoral Training in Advanced Composites for Innovation and Science (ACCIS CDT) was established in 2009 following a £7.1 million award from the UK Engineering and Physical Sciences Research Council. Our vision is to develop the next generation of technical leaders in advanced composites by stimulating adventurous interdisciplinary research, which bridges the length scales, connects to and interfaces between the disciplines of engineering, chemistry, physics and life sciences, and bestows enhanced and added functionality to composite materials. Ten fully-funded studentships per year are offered on our four-year multidisciplinary PhD programme in Advanced Composites. The programme comprises a one-year innovative taught component and a three-year research project, and is underpinned by a programme of skills training and professional development. Students are recruited from a variety of academic disciplines across engineering, science and mathematics.

We benefit from significant industrial support with current PhD projects being undertaken in collaboration with AgustaWestland, Airbus, dtstl, EOARD, GE Aviation, Haydale, Rolls-Royce and Vestas. We also collaborate with other academic institutions and research centres locally, nationally and internationally. Find out more about our students and our research via the ACCIS CDT website.