Innovative millimetre wave communications to be demonstrated at London exhibition 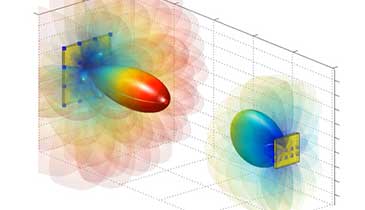 Snapshot of millimetre wave dynamic beamforming. The algorithm selects the best beam pattern at both the base station and mobile terminal University of Bristol Communication Systems and Networks research group

Wireless data connections that exploit millimetre wave radio spectrum (30GHz to 300GHz) are expected to be used in worldwide 5G networks from 2020. The University of Bristol’s Communication Systems and Networks research group has partnered with Bristol start-up Blu Wireless Technology (BWT) to develop this technology and they will demonstrate their innovative work at the Small Cells World Summit in London this week [10-12 June].

Millimetre wave radios use much higher carrier frequencies than those in current systems, such as 4G and Wi-Fi.  The University and BWT radios transmit data approximately 50 times faster than the 2.4GHz Wi-Fi standard.  At 60GHz there is significantly more unallocated spectrum, and this opens up the possibility of multi-Gigabit data rates to future mobile terminals.

The challenge at 60GHz is how to overcome the additional signal losses. If transmit powers and antenna gains were equal, at 60GHz the received signal would be 1000x weaker than a Wi-Fi signal. To address this challenge, millimetre wave systems need electronically steered high gain antennas to track users as they move within the network.

A demonstration of results from the first phase of work, supported through the West of England Local Enterprise Partnership Regional Growth Fund, will be showcased for the first time at the summit to be held at ExCel London.

Using a newly developed virtual network simulator the team will show how antenna beam steering supports robust point-to-point connections up to 400 metres. For 5G mobile access, the team will demonstrate multi-gigabit beamforming and mobile tracking up to 100 metres from the base station. In both cases beam forming is shown to overcome the harmful effects of blocking trees and buses.

A video has been produced to demonstrate the joint research on mmWave Gigabit communications by the University of Bristol and BluWireless Technology.

Mark Beach, Professor of Radio Systems Engineering, Department of Electrical and Electronic Engineering, said: “This technology builds on a wealth of knowledge and expertise over the last 25 years in Smart Antenna systems and an in-depth understanding of radiowave propagation. Our rich mix of fundamental research and practical validation at Bristol makes us an ideal partner for industrially relevant projects such as this.”

Andrew Nix, Professor of Wireless Communication Systems and Head of the Department of Electrical and Electronic Engineering, added: “Our sophisticated ray tracing tools have been combined with the University’s high performance computing facilities to enable the rapid analysis of complex millimetre wave systems. In particular, our simulators combine detailed channel models with antenna arrays and beam tracking algorithms to dynamically determine user performance in a virtual network.”

Henry Nurser, CEO at Blu Wireless Technology, explained: “BWT has developed the Gigabit Digital Baseband necessary for millimetre wave communications to enter the mass market. At the Small Cell World Summit we’re presenting some of the details behind our innovative system-level solutions, how this can be applied to solve the total cost of ownership (TCO) problems associated with backhaul for small cells and why Europe needs to re-think regulations for outdoor 60GHz networks.”

For more than 20 years academics from the University of Bristol have played a key role in the development of wireless communications and in particular, they have contributed to the development of today’s Wi-Fi and cellular standards.

Andrew Nix received his PhD in High Throughput Wireless Communications from the University of Bristol in 1993.  He is currently Professor of Wireless Communication Systems at the University of Bristol and is to become Dean of the Faculty of Engineering from 1 August 2014.  He heads the Department of Electrical and Electronic Engineering and also leads the Communication Systems and Networks research group (14 academics, 20 research staff and 50 PhD students).

His research interests include radio wave propagation modelling, advanced Wi-Fi systems and 5G networks and architectures. Andrew’s outdoor ray models were amongst the first to fully support MIMO communications and are well known for supporting “whole city” analysis, including illumination to and from airborne platforms. His indoor models are used extensively in the test and verification of in-home Wi-Fi routers.

Andrew was a founder member of ETSI RES10 (1992-1995), the committee that drafted Europe’s first WLAN standard (Hiperlan), and later participated in the formation of the IEEE 802.11 standards.  In 2001 Andrew co-founded ProVision Communications, a UK based company that specialises in the robust transmission of whole home HMDI signals via Wi-Fi and Wi-Fi over cable solutions. In 2013 Andrew joined the Strategic Advisory Board of BluWireless Communications, a Bristol based SME developing gigabit backhaul and access solutions in the millimetre wave bands.

To help promote electrical and electronic engineering Andrew sits on the advisory board of the UK Electronics Skills Foundation. Andrew has successfully supervised more than 50 PhD students and published in excess of 400 journal and conference papers.

Mark Beach received his PhD for research addressing the application of Smart Antennas to GPS from the University of Bristol in 1989, where he subsequently joined as a member of academic staff. He was promoted to Senior Lecturer in 1996, Reader in 1998 and Professor in 2003. He was Head of the Department of Electrical and Electronic Engineering at the University of Bristol from 2006 to 2010.

A core focus of his research is the application of multi-element antenna systems (also known as Multiple-Input Multiple-Output (MIMO) or Smart Antennas) to enhance the performance of wireless systems in terms of higher data rates, whilst conserving both bandwidth and power. Fundamental to the successful design and deployment of such systems is an in-depth understanding of the multi-dimensional wireless channel necessitating joint characterisation of both the antenna elements and the propagation medium. He has established a world-leading multi-channel spatial-temporal measurement and analysis facility at Bristol, with an operational capability only matched by a few research centres across the global, with the outputs driving the channel models associated with the wireless standards. His track record in this field and strong industrial collaborations also played a major role in attracting the University Innovation Centre in Communications, Computing and Content to Bristol, and more recently the EPSRC funded UK Centre for Doctoral Training in Communications.

Mark is the UK Representative on EU COST IC1004, member of the EPSRC ICT Strategic Advisory Team (SAT) and a member of the mVCE steering board. He is a regular speaker at international events on the future of wireless communications and external PhD examiner both in the UK and overseas.