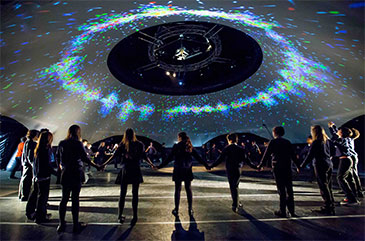 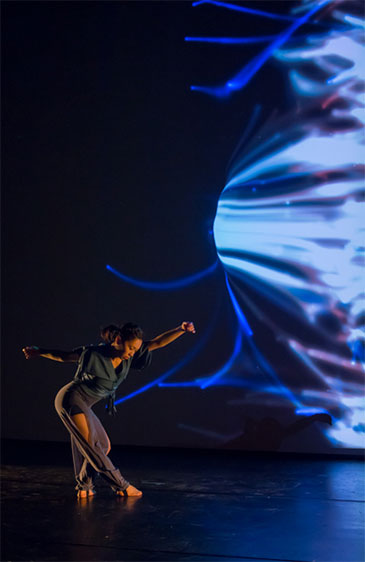 A research project from the University of Bristol has won a national Engage Competition run by the National Co-ordinating Centre for Public Engagement (NCCPE).

This cutting-edge, interactive public engagement project invites members of the general public to step into a real-time interactive atomic simulation. Originally developed from research into high-performance computational atomic dynamics by Royal Society Research Fellow Dr David Glowacki (who holds joint appointments between Bristol’s School of Chemistry and Department of Computer Science), it has formed a major attraction at cultural and educational settings within the UK and internationally, elegantly merging research in science, technology, high-performance computing, and art to engage people from a range of backgrounds. By visualising participants as energy fields in real-time, participants take part in an immersive visual, kinesthetic and auditory experience, where their movement generates sound and image.  The project aims to open ways for a greater appreciation of the inherent and subtle beauty of the invisible atomic world, inspiring the public to ask how scientists understand the world, and to enable participants to both learn and have fun. This joint project was submitted by UWE’s Dr Tom Mitchell.

The winners were announced at the national Engage Competition Awards ceremony on 11 June at the Natural History Museum. The competition forms part of Universities Week, a week-long celebration of public engagement with research that is taking place across the UK from 9 June.

The University of Bristol had a total of three projects shortlisted for the final.  Being shortlisted for the NCCPE award is a remarkable achievement given that over 230 entries were received. Applications uncovered a broad range of high quality activity inspiring and involving public audiences, and covered a diversity of subjects – from exploring the universe to understanding the atomic world; from representations of childhood to supporting innovation in early years learning; from community organisations working alongside university researchers to using drama or comedy to animate research.

Josephine Walker, a PhD student in the School of Biological Sciences, was shortlisted in the Collaboration category for a project entitled ‘Sustainable management of intestinal parasites of Livestock in Botswana’. This involves working directly with farmers in Botswana to improve livestock health and gather data that will enable scientists to develop sustainable and cost-effective worm treatment strategies. Farmers were engaged in the research process during the planning and data collection stages so that the management changes suggested were locally relevant and feasible for the farmers to implement. It is hoped that the knowledge gained during this research project will inform locally relevant and seasonally targeted parasite treatment that will provide further benefit to the farmers.

‘Know your Bristol’ (KyB), which involves a large team from across the University led by Professor Robert Bickers in the Department of History, was shortlisted in the History and Heritage category. Funded by the Arts & Humanities Research Council through the Connected Communities programme, KyB is a collaborative project between the University of Bristol, Bristol City Council and several local community groups. It aims to enable people to explore and co-create research on Bristol’s history, heritage and culture using digital tools. KyB worked with local groups to create a community history layer on the Council’s online interactive map, Know Your Place. On this site, funded by English Heritage, users can peel away layers to reveal historic maps and see how the urban landscape has transformed over time. Creating a community layer meant bringing people together to enrich the map with their own content, including family histories and memories, as well as films, photographs, and historical artefacts. Now publicly available on Know Your Place, these digitised stories and images form part of an ever-growing resource about Bristol’s heritage. Building on this success, KyB has set out to connect with more Bristol residents, especially those whose stories tend to be absent from official histories and maps. This latest phase of the project involves working with eight community groups to create spaces in which people can come together to co-produce knowledge about their city.

Professor Guy Orpen, Pro Vice-Chancellor at Bristol University and Chair of Bristol's Engaged University Steering Group, said: "Engaging with society is a core part of our mission as a University and we value the contribution of our staff and students to these activities. As such, we are delighted to have three of our projects recognised as finalists in the NCCPE's competition. They each embody an important facet of engagement: from involving people in the research process, to co-creating knowledge with local communities, and developing innovative engagement techniques."

John Womersley, Public Engagement Champion for Research Councils UK, said: "It is great to see so many examples of the valued contributions that UK researchers make to society. When people think of public engagement, what usually comes to mind is the need for researchers to share their findings. Of course that's hugely important, but the entries to this competition show a much richer range of two-way engagement that can bring much deeper benefits both to research and society."

Nicola Dandridge, Chief Executive, Universities UK, said: "The NCCPE competition has provided an excellent vehicle for universities’ engagement with the public to be recognised during Universities Week, which this year aims to inspire the public about world-leading research taking place in higher education. The standard and sheer volume of entries received is a reflection of the increasing trend for UK researchers and the public to work together. Public engagement is important to the success of the higher education sector and as part of that the NCCPE plays a pivotal role in supporting universities to engage with the public."

Paul Manners, Director of the NCCPE, said: "As part of our work to inspire universities to improve their support for engagement, the competition aimed to find and celebrate excellent practice from across the UK. We have been delighted by the high quality of entries, which has raised the bar on what can be achieved through an engaged approach to research. The culture of the academy is changing, as researchers recognise the value of engagement, and we hope the competition provides an opportunity to inspire more people to get involved."

Set up in 2008 as part of a national initiative to inspire a culture shift in how universities engage with the public, the NCCPE is funded by the Higher Education Funding Councils, Research Councils UK and the Wellcome Trust. The centre is hosted by the University of Bristol and the University of the West of England and works with universities to support them to engage the public with their work. Critical to this are a range of things, including reward and recognition of those involved in public engagement.

The NCCPE launched the Engage competition to provide a national opportunity to recognise and celebrate some of the effective public engagement with research activity that universities are involved in across the UK. Over 230 entries were received, and the standard was exceptionally high. There are eight categories, each with two or three finalists. Categories are Established projects; Individual led projects; Health and wellbeing; History and heritage; Art, design and culture; Science, technology, engineering and maths; Engaging with young people; Collaboration. As well as a winner for each category, there will be an overall winner of the Engage competition announced on 11 June.

Universities Week 2014 was launched on Monday 9 June at the Natural History Museum in London, where a week-long public event will showcase some of the best of UK university research.  The event will feature 45 universities, including research stations, pop-up performances, debates and live research demonstrations, all covering a range of research themes.