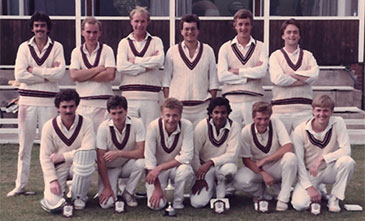 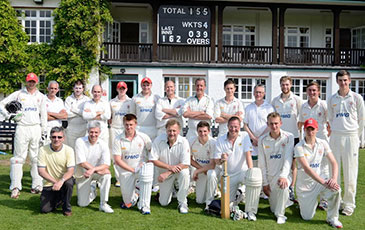 Members of the current and former Bristol cricket teams 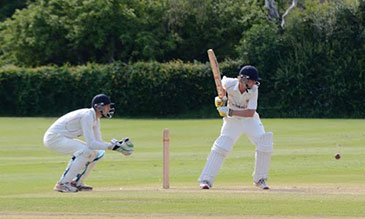 Let the games begin: players at the anniversary cricket match

World Cup, what World Cup? The summer of sport got off to a cracking start at the University’s very own outdoor sports centre at Coombe Dingle last Friday, with a friendly match between Bristol cricketers young and not so young.

The match was organised to commemorate the only time that Bristol has won the Universities Athletics Union (UAU) Championship. On said hallowed occasion – 29 June 1984 – the Bristol cricket team became UAU senior champions against the odds in a Herculean display of batting that flummoxed the more experienced Durham opposition (not to mention some of the Bristol players themselves).

The opposing sides at last week’s clash comprised a mixture of former and current students – either because the current team of young pretenders was deemed too green for the match-hardened alumni, or because a bunch of oldsters couldn’t possibly withstand the challenge from a fit and youthful student XI, depending on your point of view.

Pete Tucker (BSc, 1984), who managed to track the former team members down, said: ‘The wonders of the internet made finding all the players relatively simple and it’s been a very rewarding task as the 1984 UAU final remains the personal sporting highlight for many of them. Everyone went to great lengths to get to Bristol for the match and thoroughly enjoyed the celebration with the current students.’

‘Given the outstanding season the University 1st XI has had in 2014, it was great to meet the players from the 1984 side – as they showed on the field, they are still a competitive bunch,’ commented Dan Brown, current club captain and French and Spanish student.

Mark Hutchinson (BA, 1985), captain of the 1984 winning team, was overjoyed to see everyone after such a long time. He noted that ‘a lot of water has gone under the bridge since we won the UAU, but that match remains as clear in all our minds as the day it happened 30 years ago.  We even managed to surprise the current students with a few of our remaining silky skills.’

In the anniversary match, the team captained by Mark Hutchinson came out on top by 40 runs over the side skippered by Dan Brown. The highlight of the day was the dismissal of Brown to an extraordinary reflex catch at gully by Hutchinson, an incident that will never be forgotten by either of them, especially Brown.

The match brought back plenty of memories from 30 years ago. Jeremy Tavaré (BSc 1982, PhD 1986), now Professor of Biochemistry and Director of the Elizabeth Blackwell Institute, recalled the daunting prospect of facing Durham in the UAU final after beating Birmingham in the previous round.

‘Durham fielded a strong side of players with county experience, including their captain, Colin Metson, who went on to have a long and illustrious professional career with Middlesex and Glamorgan’, he said. ‘They scored a mammoth 314-9 in 60 overs. In those days, anything over 250 was considered pretty much unassailable. We were met with a barrage of sixes hit to all parts of the very small ground at Bymbo Steelworks near Wrexham (we missed out on the more glamorous test match venues of previous years like Edgbaston and Trent Bridge). These had to be collected by climbing down the sides of the slag heap on the top of which the ground was built.’

But Bristol’s teamwork more than compensated for its lack of equivalent experience. ‘The highlight of our response was a remarkable opening gambit of 222 runs from the captain, Mark Hutchinson, and Rohan Bishop [BSc 1985]’, remembers Tavaré. This was consolidated by valuable contributions from the middle order (with the exception of number three batsman, Tavaré himself, who, in his own words ‘was a quivering wreck by the time I got to the crease’).

Bristol won by four wickets and with two overs and two balls to spare. ‘It was a memorable victory,’ concluded Tavaré – possibly more memorable for the boisterous celebration that continued on the long drive home in the minibus – ‘and one that cemented several lifelong friendships.’