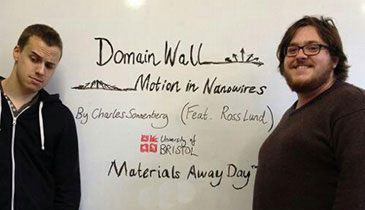 Dr Lund (right) has recently completed his PhD studies at the University of Bristol. He is pictured with Dr Charles Sonnenberg who contributed to the research together with Dr Jonathan Robbins and Dr Valeriy Slastikov (Bristol) and Dr Arseni Goussev (Northumbria University).

Competition to create the smallest, lightest and cheapest laptop on the market is motivating the ongoing search for a better computer-memory device then the current, conventional 2D hard-disk technology. Mathematicians from the University of Bristol have been analysing the potential of one such initiative: the 'racetrack memory' device, proposed by researchers at IBM.

In this 3D memory device, 'bits' of information are stored in tall columns of very thin magnetized nanowires.  The thickness of these wires – about 1,000 times smaller than a human hair – has special properties which mean magnetism along the wire can only point in two directions: up or down.

Each wire is divided into multiple domains where the magnetism points either up or down and each bit of information is stored in each domain.  Since the structure is so tiny, a large number of bits can be stored in a very small space.  Furthermore, the nanowires can be kept in a 3D array which is much smaller and more cost-efficient then the current 2D hard-disk.

But how are these bits of information to be 'read' and 'written'?  The answer lies in the divider between each domain: the domain wall.  When nanosecond current pulses are sent through the wire, the current interacts with the domain wall, causing it to be shifted along the wire.  As long as the domain walls propagate at a constant speed, each bit of information can be read or written in a time proportional to the speed of the domains walls.

Will this phenomenon work in practice?  Recent research by Dr Ross Lund from Bristol's School of Mathematics, which investigated the stability of such domain walls when different strengths of current were applied through the wire, suggests it will unless too great a current is applied.

Dr Lund said: "We know that when the current exceeds a threshold level, the domain walls stop translating at a reliable constant speed but what happens to the domain walls once too much current is applied was not yet properly understood – until now."

Using a mathematical technique called asymptotic expansions, Dr Lund has been able to explain the dynamics of the domain walls.  Once current exceeds the threshold value the domain walls no longer travel at a uniform speed but instead behave in a mathematically beautiful but unstable fashion, making it impossible for any 'bit' of information to be read or written.

Dr Lund's work proves the domain walls will, on average, still propagate along the wire but with additional oscillatory and rotational features.  The domain walls translate forward in a right-sided weighted oscillation, similar to the notion of 'two steps forward, one step back'.

Furthermore, the 'up-or-down-the-wire' magnetisation vectors start to rotate around the wire.  This unsteady behaviour makes it impossible to read or write information accurately.  The hard-drive thus become effectively useless if too great a current potential is applied across the magnetic wire.

Understanding the racetrack memory device's process fully in mathematical terms provides a full explanation of the complicated process that goes on near the threshold current potential.  This analysis is fundamental to obtaining the fastest and most reliable such device and should help to develop further this new alternative hard-drive device.

'Domain wall motion in magnetic nanowires: an asymptotic approach' by A. Goussev, R. Lund, J. Robbins, V. Slastikov and C. Sonnenberg in Proceedings of the Royal Society A