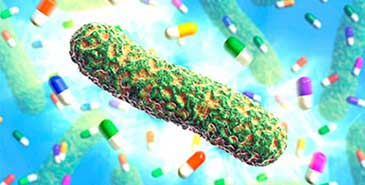 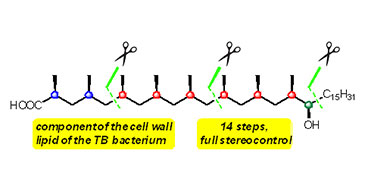 Structure of the complex chiral lipid, hydroxyphthioceranic acid, and the Bristol disconnections used in its synthesis

A new strategy which enables molecules to be disconnected essentially anywhere, even remote from functionality, is described by researchers from the University of Bristol in Nature Chemistry today. The method is now being developed to explore the possibility of creating a tuberculosis (TB) vaccine.

The organic synthesis strategy, developed by Professor Varinder Aggarwal and Dr Ramesh Rasappan in the School of Chemistry, involves a new method for combining smaller fragments together in which there is no obvious history in the product of their genesis.

The paper describes not only this new strategy, but also its application to the shortest known synthesis, just 14 steps, of hydroxyphthioceranic acid, a key component of the cell wall lipid of the virulent mycobacterium tuberculosis.

Professor Aggarwal said: “Tuberculosis bacteria (TB) have an extraordinary thick lipid coat which acts as an impenetrable waxy barrier to cytotoxic agents, making it especially challenging to combat. Vaccination would be an ideal solution against TB and the lipid coat has been identified as a potential antigen. This requires the synthesis of the complex lipid which is composed of a disaccharide sugar core along with the complex chiral lipid, hydroxyphthioceranic acid.”

In a collaborative project funded by the Gates Foundation, the method is now being scaled up to explore the possibility of creating a TB vaccine based on the cell wall sulfolipid.