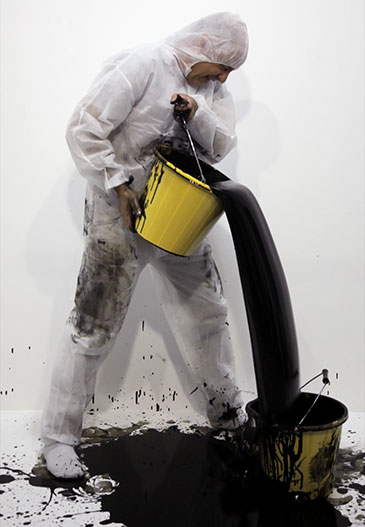 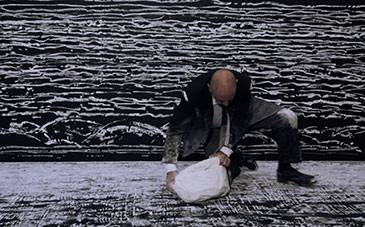 Neville Gabie, until recently Artist in Residence at the University’s Cabot Institute, is to present work undertaken at the institute at WOMAD UK 2014 later this month. This is the first time WOMAD has commissioned artwork for the annual music and arts festival.

Gabie’s thought-provoking artwork, Experiments in Black and White, will feature in the World of Art installation at Charlton Park, Malmesbury on 24-27 July. Experiments in Black and White is an exploration of four materials – ice, chalk, oil and air. These four elements are fundamental aspects of the natural world and are contested and debated as we look to the future of the planet.

The artwork will appear in three different locations across the festival site, and will comprise an outdoor screening of five films, a performance drawing and a participatory project entitled ‘Collective Breath’.

The films feature the artist working with ice, chalk and oil, in arduous, physical performances which heighten our awareness of these vital natural elements. For the performance drawing, Gabie will attach a large chalk boulder to a rope and create a linear drawing along a tarmac road that runs through the festival site. In Collective Breath – a response to research at the Cabot Institute on clean air – festival-goers will be invited to fill a bag with their own breath and make suggestions as to where it might be released. Gabie will subsequently travel to one of the suggested locations, attach the pressurised vessel to a large, purpose-built sound instrument, release the air, and record the sound and action on film.

Neville Gabie began his residency at the Cabot Institute in 2012 with funding from the Leverhulme Trust, working with scientists and academics on a range of aspects of climate change, from the physical to the social and political potential impact of climate change.  While at the institute, Gabie created the Experiments in Black and White (‘oil’ and ‘chalk’) inspired by Cabot Institute academics and their research.

With a background in sculpture, Gabie’s practice has always been driven by working in response to specific locations or situations caught in a moment of change. Highly urbanised or distantly remote, his work is a response to the vulnerability of a landscape subject to change. Motivated by a personal need to understand his own sense of place, Gabie’s interest is in establishing a working relationship within a particular community as a means of considering its physical, cultural or emotional geography.

The Cabot Institute carries out fundamental and responsive research on risks and uncertainties in a changing environment. We drive new research in the interconnected areas of climate change, natural hazards, water and food security, low carbon energy, and future cities. Our research fuses rigorous statistical and numerical modelling with a deep understanding of social, environmental and engineered systems – past, present and future. We seek to engage wider society by listening to, exploring with, and challenging our stakeholders to develop a shared response to 21st century challenges.

Find out more about our work at www.bristol.ac.uk/cabot