How common is aggression in UK dogs? 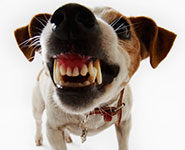 Aggressive dogs represent a serious risk to human health, tragically causing fatalities in rare cases. The development of aggression can also impact on a dog’s welfare, because of a breakdown of the human-pet bond, euthanasia or relinquishment. New research has estimated the prevalence of human-directed aggression in different situations, and examined the potential risk factors for dogs showing aggression towards people.

The study, led by academics at the University of Bristol’s School of Veterinary Sciences and published online in Applied Animal Behaviour Science, investigated the occurrence of dog aggression towards people with a survey of UK dog owners.

Around 15,000 questionnaires were distributed to dog owners of which 4,000 were returned and used in the analysis. The researchers found that aggression towards unfamiliar people was reported more commonly by owners than aggression to family members.

Nearly seven per cent of owners responded that their dog barked, lunged, growled or actually bit when people came to the house, and five per cent reported these behaviours on meeting people when out on walks.

In contrast, about three per cent of dogs were suggested by owners to show aggressive behaviour towards family members. The study highlighted that the majority of dogs showing aggression do so in just one of these situations. This indicates that the common tendency to categorise dogs as either generally ‘safe’ or ‘vicious’ is a misconception, and that most dogs show aggression as a learnt response to particular situations.

Dr Rachel Casey, Senior Lecturer in Companion Animal Behaviour and Welfare, said: “Dog owners and members of the public need to be aware that any dog could potentially show aggression if it is anxious or feels threatened, even when it has never done so before.

“On the other hand, dogs which have shown aggressive signs in one situation are not necessarily ‘dangerous’ when in other contexts – an important consideration in the assessment of animals, such as in rehoming centres.”

The study also compared the characteristics of those dogs reported to show aggression with those which had never done so. It was revealed that factors such as training classes attended, type of training method used, the sex and neuter status of dogs, the age category of owners, and the breed of dogs were all associated with the occurrence of aggression.

Interestingly, different risk factors were found to be significant in statistical models examining aggression to family members and unfamiliar people. This suggests that different factors are important in the development of aggressive signs depending on the situation.

The authors would like to thank the Blue Cross, Dogs Trust, Kennel Club and RSPCA for financial contributions towards this project. Dogs Trust is also thanked for supporting Emily Blackwell.

The authors would also like to thank the veterinary practices, event organisers and pet stores which assisted in questionnaire distribution, and all the owners who kindly completed questionnaires.