New insights into the origin of birds 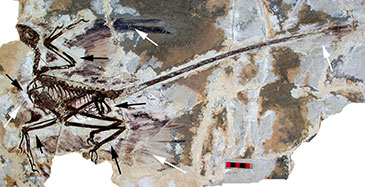 Skeleton of the paravian dinosaur Microraptor, from the Early Cretaceous (125 million years ago) of NE China. This dinosaur was experimenting with flight, but its unique kind of flight – gliding using all four feathered limbs – did not lead to anything. Image supplied with permission from the Institute of Vertebrate Paleontology & Paleoanthropology (IVPP), Beijing.

The key characteristics of birds which allow them to fly – their wings and their small size – arose much earlier than previously thought, according to new research from the Universities of Bristol and Sheffield into the Paraves, the first birds and their closest dinosaurian relatives which lived 160 to 120 million years ago.

Mark Puttick and colleagues investigated the rates of evolution of the two key characteristics that preceded flight: body size and forelimb length.  In order to fly, hulking meat-eating dinosaurs had to shrink in size and grow much longer arms to support their feathered wings.

"We were really surprised to discover that the key size shifts happened at the same time, at the origin of Paraves," said Mr Puttick of Bristol's School of Earth Sciences.  "This was at least 20 million years before the first bird, the famous Archaeopteryx, and it shows that flight in birds arose through several evolutionary steps."

Being small and light is important for a flyer, and it now seems a whole group of dozens of little dinosaurs were lightweight and had wings of one sort or another.  Most were gliders or parachutists, spreading their feathered wings, but not flapping them.

"Out of all these flappers and gliders, only the birds seem to have been capable of powered flight," said co-author Mike Benton, Professor of Vertebrate Palaeontology at Bristol.  "But you wouldn’t have picked out Archaeopteryx as the founder of a remarkable new group."

The study applied new numerical methods that calculate the rate of evolution of different characteristics across a whole evolutionary tree, and identify where bursts of fast evolution occurred.

"Up to now you could only have guessed roughly where the major evolutionary transitions occurred," said Dr Gavin Thomas of the University of Sheffield, "but the new methods pinpoint the size changes.  The small size of birds and their long wings originated long before birds themselves did."

Birds owe their success to their flight, wings and feathers.  Until the 1990s, when the first feathered dinosaurs were found in China, birds were thought to have originated rapidly, marking a major transition from dinosaurs.  Now, we know that Archaeopteryx was only one of a large number of small, flying dinosaurs.

"The origin of birds used to be seen as a rapid transition," said Mark Puttick, "but now we know that the key characteristics we associate with them arose much earlier."