Exploring the impact of Tasers in the UK 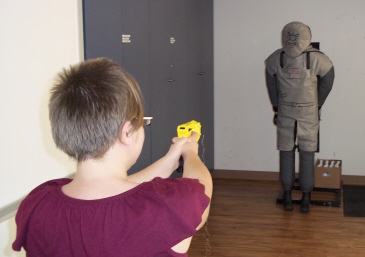 Social Scientists have called for a greater comparative analysis of the impact of Tasers used in law enforcement. The next generation of the electric-shock weapon used by police forces in England and Wales is currently under review.

The research, by University of Bristol Law School PhD student Abi Dymond, suggests that in order to evaluate the impact of TASERs, better data collection on other force, such as batons and irritant spray, used by the police would assist in providing a clearer understanding of the impact on officer safety and injury rates of civilians.

This report, published in the Oxford Journal of Policing / Policing: A Journal of Policy and Practice, comes less than a month after the Home Secretary Theresa May called for improved data reporting on use of force by the police.

The ‘Policing Science: The Lessons of Taser’ research is funded by the Economic Social Research Council (ESRC), via the South West Doctoral Training Centre (SWDTC).

Lead author Ms Dymond, whose PhD in Security Conflict and Justice is at the Universities of Exeter and Bristol, is working alongside the Association of Chief Police Officers and various UK police forces on the research.

Ms Dymond is keen to highlight the need for comparative data. She said: “TASER clearly has a valuable role to play in policing - and precisely how valuable is a key question.  Whilst much information is currently being captured on TASER use itself, limited information was collected on police use of force, officer and civilian injuries prior to its introduction, which makes it difficult to assess the impact TASER has had.

“Whilst some steps are already being taken in this direction, there is an urgent need for better data collection on police use of other force such as batons and irritant spray in England and Wales to allow us to put the benefits and risks of TASER into context.”

Ten years since the initial introduction of TASER, its usage remains a sensitive and controversial issue.  According to the report, following the use of a TASER police officers are required to submit a seven page use of force form to the Home Office and their force.

The police are under no obligation to submit any use of force forms for batons and irritant spray, limiting the ability to compare and contrast findings. In addition, whilst this system requires officers to record civilian injuries, there is no space for them to record injuries they may have sustained during the incident.  This complicates any assessment of the impact of TASER on officer injury rates.

Although there has been significant research on the introduction and impact of TASER, former Chief Constable and editor of the Oxford Journal on Policing Peter Neyroud CBE QPM is acutely aware of the need for ongoing research.

He said: "The deployment of TASER into operational policing was carefully considered and based on the best available research. However, this is such a crucial part of the police use of force that it is essential that the research keeps pace with the day to day practice. The ESRC funded research based at the University of Exeter is a very important programme that is adding to our knowledge and will allow the police to learn from the most up to date evidence.”

The article is appearing in the December Special Issue of the Oxford Journal of Policing, entitled Transforming the Police Through Science.

‘Policing Science: The Lessons of Taser’ by Abi Dymond and Brian Rappert in Oxford Journal of Policing.

The Economic and Social Research Council (ESRC) is the UK's largest funder of research on the social and economic questions facing us today. It supports the development and training of the UK's future social scientists and also funds major studies that provide the infrastructure for research. ESRC-funded research informs policymakers and practitioners and helps make businesses, voluntary bodies and other organisations more effective. The ESRC also works collaboratively with six other UK research councils and Innovate UK to fund cross-disciplinary research and innovation addressing major societal challenges. The ESRC is an independent organisation, established by Royal Charter in 1965, and funded mainly by the Government. In 2015 it will celebrate its 50th anniversary.