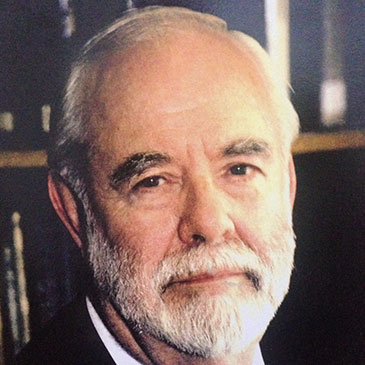 Rowland Morgan was born on 2 December 1934. He joined the University as a lecturer in Civil Engineering in 1966 and retired in 2000. In appointing him, Professor Sir Alfred Pugsley, recognised Rowland’s deep commitment to student welfare – at his peak Rowland was one of the best teachers in the Faculty of Engineering.

After leaving school Rowland did his National Service in the Navy, had a spell working for Costains in London where he met his wife Jane, and then won a National Coal Board (NCB) undergraduate scholarship in 1958 to read civil engineering at the University of Manchester. Upon graduating in 1961 he worked for the NCB for a time before moving to teach at Glamorgan Polytechnic and then at Bristol.

Rowland was much more than a good colleague – he was a good friend to many people in the University. Of course, like all of us he wasn’t perfect – but there are five qualities I would like to single out: passion, articulacy, mischief, integrity and style.

Rowland was passionate with small p and big P. We were never in doubt about what Rowland thought – he was opinionated but he was also tolerant of other people’s views. He had many passions: all things Welsh, including rugby which he played to a high level, and his chosen profession of engineering and politics. I suspect he thought most engineers were politically naïve.

He introduced students to a wider view of engineering, going beyond the science through design classes and, most importantly, through his talks to the ‘Engineer in Society’ and ‘Professional Studies’ classes. Within his chosen discipline of civil engineering he was passionate about concrete. His grandson Henry says that he knew the importance of the water/cement ratio by the time he was three.

Rowland’s passion with a big P was for his Liberal Party politics. He first stood for Parliament against Neil Kinnock twice in 1974, for Weston-super-Mare in 1979, North Somerset in 1983 and Somerton and Frome in 1987. He was vocal in his criticism of the lack of understanding of engineering and science by his party political colleagues. One of his major contributions was through his advocacy for and Presidency of the Association of Liberal Democrat Engineers and Scientists (ALDES).

The second of Rowland’s qualities was his articulacy. It wasn’t just what he said, but the way he said it with his precisely enunciated Welsh phrasing. He could be quite mischievous in meetings when things were not done properly – but it all stemmed from his strong sense of fair play. I have never forgotten a meeting of the Faculty Examiners Board in the 1970s. The preliminary internal meeting had recommended that a particular student with the marks for a first-class degree be nevertheless be seen by the External Examiner. The terms for the referral, as expressed at the internal meeting, were not passed to the External Examiner as precisely as they should have been. The student did not perform well at interview. The External Examiner was inexperienced. As a result the External Examiner announced that he had decided to drop student’s degree to a 2:1. There was a collective and audible murmur of surprise but the Dean and senior professors accepted the recommendation. Not so Rowland. He had the courage to challenge the decision with articulate reasons based on the actual marks attained in the exams and performance over three years. A very long debate ensued but eventually the student was awarded his first-class degree – Rowland’s sense of fair play and his ability to articulate won through.

Rowland’s sense of style was apparent in the way he dressed and the way he organised things. For many years he ran the Royal Academy of Engineering Visiting Design Professor scheme. He realised the importance of bringing together eminent practicing engineers into the Faculty. The success of the scheme for the Faculty was in no small part due to Rowland. For example each year one of the visiting professors gave a formal lecture. Afterwards Rowland organised a dinner for a small number of special guests and stamped his style on the evening with great subtlety. The whole event had a gravitas but was also fun and long-lasting personal bonds were made.

Engineers tend to be task-oriented; Rowland was a rare breed of engineer – he was a people person. He knew that engineers achieve things with and through people working collaboratively and all the time learning from experience.

Rowland is survived by his wife Jane, son Huw and daughter Emma, seven grandchildren and two great-grandchildren. His daughter Sarah and Huw’s twin Owain predeceased him.