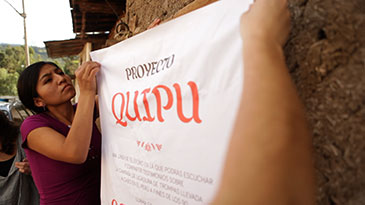 A University of Bristol project which aims to connect the voices of people affected by forced sterilisations in Peru with listeners around the world has almost succeeded in raising the £20,000 needed to develop and expand its work.

Donations can still be made on the Indiegogo crowd-funding website

The Quipu Project, a collaboration between Dr Matthew Brown and Dr Karen Tucker of the University of Bristol and Chaka Studio, is designed to collaborate with women and men who were sterilised in Peru in the mid-1990s.  Predominantly from impoverished or indigenous communities, many were forced, coerced, or not given enough information to decide whether sterilisation was what they wanted.

The project was set up to help their stories reach a wider audience and, it is hoped, encourage the Peruvian government to listen again to their testimonies.

Dr Brown said: “The Quipu Project is working with the testimonies of the most marginalized of peoples, whose voices have been heard only weakly in Peru and throughout the world.  300,000 people were sterilized in the 1990s in Peru, many of them without the opportunity to give their consent to the ‘medical’ intervention.  Most of them were women, and most were from the indigenous communities of the Peruvian highlands.

“Peru had a comprehensive Truth and Reconciliation Commission, which reported in 2003, but it neglected these people entirely.  Their suffering was an invisible one, to which even many committed human rights campaigners remained blind.”

Working with Chaka Studio and Peruvians who were sterilised, Dr Brown and colleagues have developed a free telephone line that collaborators in Peru can use to record themselves speaking about their experience of sterilisation.

The phone line operates like a web forum, and the collaborators can also listen to others’ testimonies and record responses, so people who were sterilised can offer each other support and solidarity, as the archive of testimony grows.

A team of collaborators in Peru travel to towns and villages and promote the Quipu Project by talking to people, handing out leaflets and speaking on the radio.  Once recorded, testimonies are moderated, transcribed and translated.

Dr Brown said: “After two weeks of crowdfunding, we’ve reached 75 per cent of our £20,000 target.  If we reach the target, the Quipu Project will be completed and launched, and these stories can be shared.

“Our hope is that through global recognition and by creating a record of the sterilisations, we can help the collaborators find the acknowledgement they have been fighting for.”

To watch a short film about the project and support the campaign, visit the Indiegogo website.

The Quipu Project is named after an ancient Incan counting system which used threads and knots to keep records in a predominantly oral culture.  The cords were made from cotton, llama or alpaca hair and were used for everything from tax and census-keeping to storytelling, where the threads and knots were prompts for memory and language.

A full beta test of the Quipu Project concept phone line and digital technology is currently running thanks to funding from the Tribeca New Media Fund  and CrossCurrents Doc Fund.  The initial prototype was funded by the Arts and Humanities Research Council REACT-Hub.

The money raised by the crowd-funding campaign will be used to develop the technology, including the back-end infrastructure that is the backbone of the Quipu Project, along with the phone line software, and expand the project to other areas, such as the Anta-Cusco region, where activists representing over 1,300 women and men have been organised and campaigning for 15 years.