Bristol Civil Engineering graduate is NCE Graduate of the Year 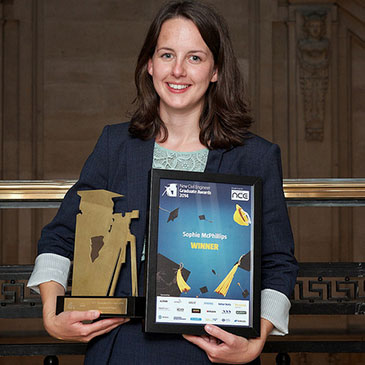 Sophie McPhillips at the awards event

Sophie (MEng 2013), who now works at the engineering company Atkins, was considered by a panel of 19 industry leaders to be the most inspirational young civil engineer of six finalists in the prestigious competition.

Sophie is currently on a placement in Africa with the charity Engineers Without Borders (having served as President of its Bristol chapter in 2012/13), where she is working with a non-governmental organisation to provide clean, safe water to 10,000 people in rural villages.

The judges commented that they were impressed by her enthusiasm, technical knowledge, communication skills and depth of understanding about the industry, and by her passion for using civil engineering to make a positive social impact.

In Sophie's third year at Bristol she carried out research, with a colleague, on water quality in Bristol's Floating Harbour, working with Bristol City Council. This was one of the pilot community-based UG projects set up by the Department for Civil Engineering and the Centre for Public Engagement, and was so successful that the Council proposed several follow-up research projects for the following year.

As President of EWB-Bristol, she helped to set up the EWB-UK Bristol & Bath Professional Network Group in collaboration with local industry. Her leadership resulted in EWB-Bristol winning the University of Bristol Union 2013 Innovation and Impact Award.

Sophie continues the run of impressive showings for Bristol Engineering graduates in the awards, including Joe Smith’s win in 2013.