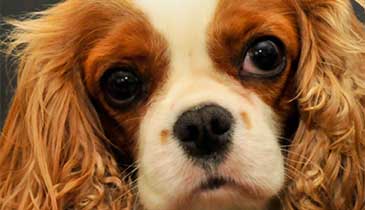 New research has identified two significant risk factors associated with painful neurological diseases in the skull shape of the Cavalier King Charles Spaniel (CKCS). The findings could help in tackling these conditions in toy dog breeds and could be used in breeding guidelines.

The study conducted by undergraduate student, Thomas Mitchell, from the University of Bristol’s School of Veterinary Sciences, and supervised by Dr Clare Rusbridge, is published online in the journal Canine Genetics and Epidemiology.

Syringomyelia (SM) is a painful condition in dogs and is more common in toy breeds. It involves the formation of fluid-filled cavities, known as syrinxes, in the spinal cord.  This condition affects many popular toy breeds, including the CKCS and Chihuahua.  In these toy breeds, SM is usually secondary to a specific malformation of the skull called Chiari-like Malformation, CM for short.

There has been debate as to whether head shape of these dogs is related to CM/SM, especially as some humans have similar characteristic facial and skull shapes, and what this may be. Identifying a head shape in dogs that is associated with these diseases would allow for selection away from these conditions and could be used to further breeding guidelines. Dogs were measured in several countries using a standardised “bony landmark” measuring system and photo analysis by trained researchers.

The researchers found two significant risk factors associated with CM/SM in the skull shape of the CKCS.  These were the extent of the broadness of the top of skull relative to its length, also known as brachycephaly, and the distribution of doming of the skull. The study suggests that brachycephaly, with resulting doming towards the front of the head, is associated with CM/SM.

Thomas Mitchell said: “Dog breeders are very experienced at selecting for a certain conformation or appearance in dogs.  Our findings may allow breeders to select away from the condition over fewer generations by choosing appropriate matings and offspring to continue breeding programmes. The identification of an appearance that might protect against developing the disease is a significant step forward in tackling this painful condition.

“The study also provides guidance to breed clubs, breeders and judges that have a responsibility to avoid obvious conditions or exaggerations which would be harmful in any way to the health, welfare or soundness of the breed.  It will also provide vets with verified advice to provide to breeders outside the show ring and to occasional hobbyists.”

A video has been produced highlighting some of the changes.

The work was funded by a grant from the Kennel Club Charitable Trust and the registered charity Cavalier Matters provided a grant for the publication of the research.

The authors would like to thank the many breeders and pet owners who participated in the study and made the data collection enjoyable, particularly Tania Ledger, Margaret Carter, Pat Barrington, The Cavalier King Charles Spaniel Club and all the people who contributed from around the world through social media. Thank you to Sandy Griffith (Stone Lion Veterinary Hospital), Claudia Petersen, Margareth de Oliviera, Herman and Bram van den Berg and Molly Bridge for supporting the data collection process.