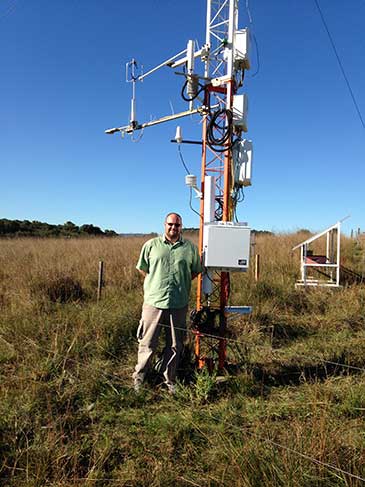 A University of Bristol project which will investigate soil moisture dynamics in the UK using novel cosmic-ray technology has been awarded £330,000 funding from the Natural Environment Research Council (NERC).

Soil moisture plays a major role in the environment/climate system because the transport of water within the land and at the land-atmosphere interface is strongly dependent on the state of soil water in a region.  Despite its importance, lack of soil moisture measurements at various spatial scales has limited our understanding of how individual physical factors control soil moisture dynamics.

The project seeks to identify whether a unified science of land-atmosphere interactions across multiple-scales can be achieved.  It aims to evaluate the uncertainties of multiple sources of soil moisture observations; identify key processes that control soil moisture dynamics in land surface models; and provide high-quality soil moisture estimates at hyper-resolution.  Ultimately, the project will enhance the representation of soil moisture and surface processes in numerical weather prediction and climate models in the UK.

A key component of the project is the use of new cosmic-ray sensors that can measure soil moisture at an unprecedented sub-kilometre scale.  This technology has revolutionized the field of hydrometeorology because it provides, for the first time, a unique opportunity to fill the gap between soil moisture observations from traditional point-scale sensors and large-scale estimates from satellite remote sensing products.

The project will also foster critical and significant training to high-skilled personnel on the use of this new innovative cosmic-ray soil moisture technique in the UK.  Principal Investigator, Dr Rosolem was part of the US COsmic-ray Soil Moisture Observing System team (COSMOS) where he worked directly on the network design and deployment of these cosmic-ray sensors across the USA.  The project has a strong collaborative effort with the Centre for Ecology and Hydrology (CEH), as part of the COSMOS-UK initiative, a national network of cosmic-ray neutron sensors to monitor soil moisture at near real-time in the UK.