Men who started smoking before age 11 had fatter sons 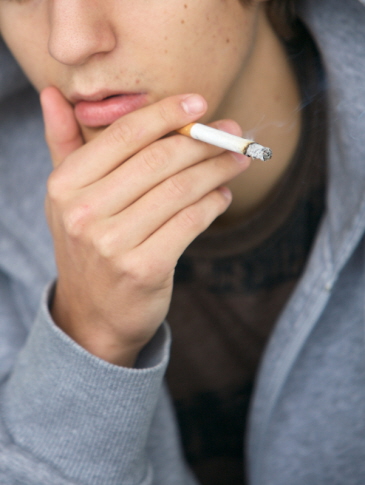 Men who started smoking regularly before the age of 11 had sons who, on average, had 5-10kg more body fat than their peers by the time they were in their teens, according to new research from the Children of the 90s study at the University of Bristol. The researchers say this could indicate that exposure to tobacco smoke before the start of puberty may lead to metabolic changes in the next generation.

The effect, although present, was not seen to the same degree in daughters. Many other factors, including genetic factors and the father’s weight, were taken into account but none could explain the change. In fact, the fathers who started smoking before 11 tended to have lower BMIs (body mass index) on average.

The effect was not seen in the sons of men who started smoking after the age of 11, suggesting that the period before the start of puberty is a particularly sensitive period for environmental exposures. This is in line with a prior hypothesis by the authors based on earlier Swedish studies that linked paternal ancestor’s food supply in mid childhood with mortality rates in grandchildren.

When measured at age 13, 15 and 17, the sons of the men in the latter category had the highest BMIs at each time point compared with the sons of men who had started smoking later or who had never smoked. More precisely, these boys had markedly higher levels of fat mass (recorded using whole-body scans), ranging from an extra 5kg to 10kg between ages 13 and 17.

The research was funded by the UK Medical Research Council (MRC) and is published today [2 April 2014] in the European Journal of Human Genetics.

Speaking about the findings, senior author, Professor Marcus Pembrey said: "This discovery of trans-generational effects has big implications for research into the current rise in obesity and the evaluation of preventative measures. It is no longer acceptable to just study lifestyle factors in one generation. We are probably missing a trick with respect to understanding several common diseases of public health concern by ignoring the possible effects of previous generations."

Professor David Lomas, Chair of the MRC’s Population and Systems Medicine Board, added: "Population studies have provided a wealth of information about health and disease, including first identifying the link between smoking and cancer more than 60 years ago. This research clearly demonstrates that such studies have so much more to give, which is why it’s vital that the future potential of cohorts and the studies they make possible is not jeopardised by the proposed EU data regulations."

To read more about the history of ALSPAC, please see this press release which marks its 1000th paper.