It’s a bubble, but not as we know it 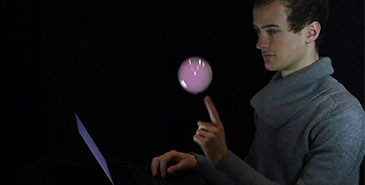 Multi-sensory technology that creates soap bubbles, which can have images projected onto them or when the bubbles are burst release a scent, will be unveiled at an international conference later this month.

The research paper, to be presented at one of the world’s most important conferences on human-computer interfaces - ACM CHI 2014 [26 April-1 May], could be used in areas such as gaming or education and encourage a new way of thinking about multi-sensory technologies.

SensaBubble, led by Professor Sriram Subramanian from the University of Bristol’s Department of Computer Science, is a chrono-sensory mid-air display system that generates scented bubbles to deliver information to people using different senses.

The bubble-based technology creates bubbles with a specified size and frequency, fills them with an opaque fog that is optionally scented, controls their route, tracks their location and projects an image onto them.

SensaBubble uses the concept of chrono-sensory experiences where layers of information are presented via different senses for variable length of times, each attracting different types of interest from the user.  Firstly, a visual display projected onto the bubble which only lasts until it bursts; secondly, a scent released upon the bursting of the bubble slowly disperses and leaves a longer-lasting noticeable trace.

Sriram Subramanian, Professor of Human-Computer Interaction in the University’s Bristol Interaction and Graphics group, said: “The human sense of smell is powerful, but there are few research systems that explore and examine ways to use it.  We have taken the first steps to explore how smell can be used to enhance and last longer in a visual object such as a soap bubble.

“There are many areas in which bubble-based technology like SensaBubble could be applied, such as a SensaBubble clock that releases the number of scented bubbles corresponding to the hour or SensaBubble Maths, an educational game for children, which incorporates smell as feedback on their success.”

Interactive technologies that are directly targeted at generating public interest and drawing the user’s attention have many applications in advertising and certain forms of education, such as museum exhibits.

SensaBubble could be adapted for use in a variety of areas including education, alerts and engaging user experiences.

The ACM CHI Conference on Human Factors in Computing Systems, the premier international conference of Human-Computer Interaction, will take place from Saturday 26 April to Thursday 1 May 2014 in Toronto, Canada.

SensaBubble has been selected to receive a SIGCHI Best of CHI Honourable Mention Award at CHI 2014.

This work has been supported by a European Research Council grant under the seventh framework programme (starting grant agreement 278576).