Sneak a peek through the mist to technology of the future 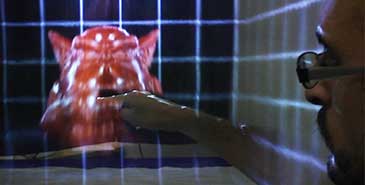 A tabletop display with personal screens made from a curtain of mist that allow users to move images around and push through the fog-screens and onto the display, will be unveiled at an international conference later this month.

The research paper, to be presented at one of the world’s most important conferences on human-computer interfaces - ACM CHI 2014 [26 April-1 May], could change the way people interact and collaborate in the future.

MisTable, led by Professor Sriram Subramanian and Dr Diego Martinez Plasencia from the University of Bristol’s Department of Computer Science, is a tabletop system that combines a conventional interactive table with personal screens, built using fog, between the user and the tabletop surface.

The personal screen allows a range of customisations and novel interactions such as presenting 2D personal content on the screen, 3D content above the tabletop or supplementing and renewing actual objects differently for each user.

Sriram Subramanian, Professor of Human-Computer Interaction, in the University’s Bristol Interaction and Graphics group, said: “MisTable broadens the potential of conventional tables in many novel and unique ways.  The personal screen provides direct line of sight and access to the different interaction spaces.  Users can be aware of each other’s actions and can easily switch between interacting with the personal screen to the tabletop surface or the interaction section. This allows users to break in or out of shared tasks and switch between “individual” and “group” work.

“Users can also move content freely between these interaction spaces. Moving content between the tabletop and the personal screen allow users to share it with others or to get exclusive ownership over it.  The research team believe MisTable could support new forms of interaction and collaboration in the future.”

With the new system, having personal screens for each user allows the view of each of the users to be customised to them, as well as maintaining all well-established tabletop interface techniques like touch and tangible interactions.

The ACM CHI Conference on Human Factors in Computing Systems, the premier international conference of Human-Computer Interaction, will take place from Saturday 26 April to Thursday 1 May 2014 in Toronto, Canada.

This work has been supported by a European Research Council grant under the seventh framework programme (starting grant agreement 278576).