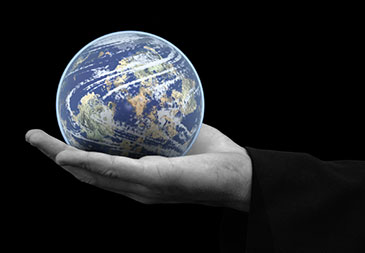 Increasing uncertainty in the climate system compels a greater urgency for climate change mitigation, according to new research from the University of Bristol.

Scientific uncertainty has been described as a 'monster' that prevents understanding and delays mitigative action in response to climate change.  New research by Professor Stephan Lewandowsky of the University of Bristol, and international colleagues, shows that uncertainty should make us more rather than less concerned about climate change.

In two companion papers, published today in Climatic Change, the researchers investigated the mathematics of uncertainty in the climate system and showed that increased scientific uncertainty necessitates even greater action to mitigate climate change.

The scientists used an ordinal approach – a range of mathematical methods that address the question: 'What would the consequences be if uncertainty is even greater than we think it is?'

They show that as uncertainty in the temperature increase expected with a doubling of CO2 from pre-industrial levels rises, so do the economic damages of increased climate change.  Greater uncertainty also increases the likelihood of exceeding 'safe' temperature limits and the probability of failing to reach mitigation targets.  The authors highlight this with the case of future sea level, as larger uncertainty in sea level rise requires greater precautionary action to manage flood risk.

Professor Lewandowsky, Chair in Cognitive Psychology and member of the Cabot Institute at the University of Bristol, said: "We can understand the implications of uncertainty, and in the case of the climate system, it is very clear that greater uncertainty will make things even worse. This means that we can never say that there is too much uncertainty for us to act.  If you appeal to uncertainty to make a policy decision the legitimate conclusion is to increase the urgency of mitigation."

Co-author, Dr James Risbey of Australia’s CSIRO Marine and Atmospheric Research, said: "Some point to uncertainty as a way to minimize the climate change problem, when in fact it means that the problem is more likely to be worse than expected in the absence of that uncertainty.  This result is robust to a range of assumptions and shows that uncertainty does not excuse inaction."

These new findings challenge the frequent public misinterpretation of uncertainty as a reason to delay action.  Arguing against mitigation by appealing to uncertainty is therefore misplaced: any appeal to uncertainty should provoke a greater, rather than weaker, concern about climate change than in the absence of uncertainty.