A microbe’s trick for staying young 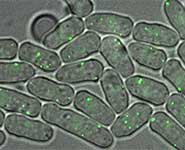 While aging remains an inevitable fact of life, an international team involving researchers from the University of Bristol and the Max-Planck Institute for Molecular Cell Biology and Genetics in Germany has found that this is not the case for a common species of yeast microbe which has evolved to stay young.

While aging remains an inevitable fact of life, an international team involving researchers from the University of Bristol and the Max-Planck Institute for Molecular Cell Biology and Geneticsin Germany has found that this is not the case for a common species of yeast microbe which has evolved to stay young.

The team has shown that, unlike other species, the yeast microbe called S. pombe, is immune to aging when it is reproducing and under favourable growth conditions.

In general, even symmetrically diving microbes, do not split into two exactly identical halves. Detailed investigations revealed that there are mechanism in place that ensure that one half gets older, often defective, cell material, whereas the other half is equipped with new fully-functional material. So like humans microbes, in a sense, produce offspring that is younger than the parent.

But aging is not inevitable for the common yeast, S.pombe. The newly-published work shows that this microbe is immune to aging under certain conditions. When the yeast is treated well, it reproduces by splitting into two halves that both inherit their fair share of old cell material.  “However,” explains Iva Tolic, the lead investigator on the project “as both cells get only half of the damaged material, they are both younger than before”. At least in a sense, the yeast is rejuvenated a bit, every time it reproduces.

Unlike other species S. pombe can escape aging as long as it keeps dividing fast enough, but what happens when it is treated badly? To test this, the researchers exposed the yeast to heat, ultraviolet radiation, and damaging chemicals, which slowed its growth to a point where the microbes could not divide fast enough to stay young.  Once subjected to these negative influences the yeast cells started splitting into a younger and an older half just like other cells. While the older cells eventually died, their offspring survived long enough to reproduce even in the harsh environments.

So, although S. pombe can age just like other organisms when it has to, it can escape aging when times are good.  “The cells manage this switch by cleverly exploiting the laws of physics” added Dr Thilo Gross, from the University of Bristol’s Department of Engineering Mathematics, who supervised some of the modelling and data-analysis work on the project, “that microbes age is in itself surprising and it is amazing to see that even such simple organisms have evolved very powerful strategies to survive.”

The findings highlight S. pombe, as an interesting organism that could potentially serve as a model of certain non-aging types of cells in humans.