Largest study into poverty reveals extent of deprivation in the UK 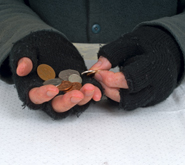 Today 33 per cent of the UK population suffers from multiple deprivation — it was 14 per cent in 1983, and over 30 million people (almost half the population) are suffering some degree of financial insecurity. These are just some of the stark findings from the largest and most authoritative study of poverty and deprivation ever conducted in the UK.

Today 33 per cent of the UK population suffers from multiple deprivation — it was 14 per cent in 1983, and over 30 million people (almost half the population) are suffering some degree of financial insecurity. These are just some of the stark findings from the largest and most authoritative study of poverty and deprivation ever conducted in the UK.

The Poverty and Social Exclusion [PSE] project, led by academics at the University of Bristol and funded by the Economic and Social Research Council [ESRC], publishes its first report ‘The Impoverishment of the UK’ today [28 Mar]. The study aims to help to find solutions to tackle the problems of poverty and deprivation.

The PSE approach — now adopted by the UK Government and by a growing number of rich and developing countries — identifies people falling below a publicly-determined minimum standard of living. This method of measuring poverty was pioneered in 1983 and repeated in studies in 1990, 1999, 2002/03 and 2012. The project provides detailed, robust and definitive trends over 30 years.

Key findings from the PSE ‘The Impoverishment of the UK’ report reveal:

Professor David Gordon of the Townsend Centre for International Poverty Research at the University of Bristol and head of the project said: “The results present a remarkably bleak portrait of life in the UK today and the shrinking opportunities faced by the bottom third of UK society.  About one third of people in the UK suffer significant difficulties and about a quarter have an unacceptably low standard of living.

“Moreover, this bleak situation will get worse as benefit levels fall in real term, real wages continue to decline and living standards are further squeezed.”

The study has found that a significant and growing proportion of the population, living conditions and opportunities have been going backwards. Housing and heating conditions, in particular, have deteriorated rapidly. The study reveals that:

Increasing numbers of children also lack items considered essential for a stimulating environment and for social participation and development.

There is widespread public agreement on what constitutes a minimally acceptable diet. Over 90 per cent agree that, for children, this means: three meals a day; fresh fruit and vegetables; and meat, fish or a vegetarian equivalent at least once a day.

The research shows that, in households where children go without one or more of these basic food necessities:

Professor David Gordon added: “It is not as a result of negligence but due to a lack of money that so many children are going without adequate food.”

In the study overall, more than one in four adults (28 per cent) have skimped on their own food in the past year so that others in the household may eat.

Significant proportions of the population find it difficult to cope on their current incomes:

Joanna Mack from The Open University, who, with Stewart Lansley, devised the study method in 1983, said: “Levels of deprivation today are worse in a number of vital areas – from basic housing to key social activities - than at any point in the past thirty years.

“These trends are a deeply shocking indictment of 30 years of economic and social policy and reflect a rapid growth in inequality. This has meant that, though the economy has doubled in size during this period, those at the bottom have been increasingly left behind.”

The first results from this study will be broadcast on ITV at 7.30pm on Thursday 28 March in a special Tonight programme on ‘Breadline Britain’.

The full Living Standards questionnaire can be downloaded from the PSE website: www.poverty.ac.uk.