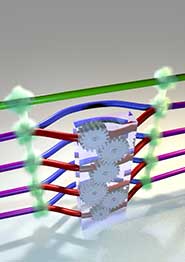 The team implemented the ‘phase estimation algorithm’ — a central quantum algorithm which achieves an exponential speedup over all classical algorithms.  It lies at the heart of quantum computing and is a key sub-routine of many other important quantum algorithms, such as Shor’s factoring algorithm and quantum simulations.

Professor Jeremy O’Brien, director of the Centre for Quantum Photonics at the University of Bristol said: “Implementing a full quantum algorithm without knowing the answer in advance is an important step towards practical quantum computing.  It paves the way for important applications, including quantum simulations and quantum metrology in the near term, and factoring in the long term.”

The research is published in Nature Photonics.