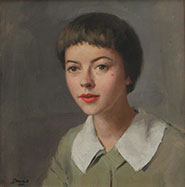 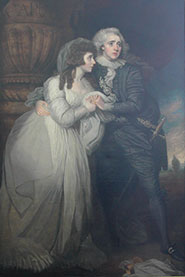 Over two hundred paintings in the care of the University of Bristol and its Theatre Collection are part of a hugely ambitious project to put online the United Kingdom’s entire collection of oil paintings in public ownership.

The Your Paintings project by the Public Catalogue Foundation (PCF) and the BBC, completed today, means the UK is the first country in the world to give such access to its national collection of paintings.  The University is one of 3,217 venues across the UK which have participated in the project which features a total of 211,861 paintings now on the Your Paintings website.

One hundred and nineteen paintings in the University of Bristol Theatre Collection feature on the website.  The paintings, some of which were purchased with assistance from the Art Fund, form an integral part of the Theatre Collection’s wider holdings and include many images of eighteenth, nineteenth and twentieth century actors such as Sarah Siddons, Ellen Terry and John Gielgud as well as scenes and theatre interiors.  Many actors are portrayed in character including David Garrick as Don Juan, Herbert Beerbohm Tree as Cardinal Wolsey in Henry Vlll and Dorothy Tutin as Joan of Arc.

Some of the more interesting paintings from the Theatre Collection now available online include the rather haunting Charles Kean as King Lear by William Etty (the Collection’s first formal acquisition of an oil painting in 1957), the paintings by William Hamilton R.A. of Sarah Siddons in The Tragedy of Isabella and of her brother John Philip Kemble in Richard III, and Mather Brown’s Romeo and Juliet showing a happy ending with the lovers emerging from the tomb!

Jo Elsworth, Director of the Theatre Collection, said; "In theatre, where everything is so ephemeral and so little remains to represent the performance event itself, the artwork takes on an additional significance.  It is wonderful to see these oil paintings made so widely available to the public through the Public Catalogue Foundation and the BBC Your Paintings project."

Ninety-five paintings held by the University of Bristol also feature on the website.  They include portraits of former Chancellors, including two of Sir Winston Churchill as well as a 1948 oil painting by him of Rocks near Cannes.  Views of the University and of Bristol such as a 1835 painting of Races on Clifton Down by James Pollard are also among the images catalogued online.

The PCF started making a photographic record of the UK’s oil paintings in 2003 and the Your Paintings website, built by the BBC, was launched with 63,000 paintings in June 2011. The project covers paintings not only held by museums and galleries but also works in universities, local councils, hospitals and even paintings held in fire stations, zoos and a lighthouse.  Typically 80 per cent of these paintings are not on view whilst the vast majority have never been photographed.  All oil paintings owned by the nation are shown irrespective of perceived quality and condition.

Your Paintings now allows everyone to see the full extent of the national collection for free together with BBC TV documentary archive and biographical information for selected artists from Oxford University Press.  It is a project that will benefit art enthusiasts, students, curators, researchers, tourists and anyone unable to make the journey to the collections.

In February 2013, the BBC will lead a nationwide celebration of Your Paintings with many opportunities for the public to discover paintings that have rarely been on view.  More information will be announced on Twitter @your_paintings .

Andrew Ellis, Director, the Public Catalogue Foundation, said: “No country has ever embarked on such a monumental project to showcase its entire oil painting collection online.  Working with collections all over the land, this project reveals to the world the UK’s extraordinary holding of oil paintings.  Anyone with internet access, anywhere in the world, can now see them all, completely for free.”