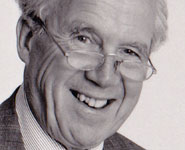 Roy Severn was one of the pioneers of earthquake engineering and a leading international researcher. His work in collaboration with others around the world has informed codes of practice and techniques to make new buildings safe in earthquakes, saving thousands of lives.

Joining the University of Bristol as a lecturer in 1956, Roy became a Pro Vice-Chancellor, twice Dean of Engineering, Head of the Department of Civil Engineering and Director of the Earthquake Engineering Research Centre, before retiring in 1995. He was elected President of the Institution of Civil Engineers in 1990-91.

Roy Severn was born in Hucknall, Nottinghamshire in September 1929 and eventually moved with his family to Great Yarmouth. In 1947, he read mathematics at the Royal College of Science in London. He played cricket, rugby and soccer, and as a direct consequence met Professor Sammy Sparkes of Imperial College when they both played for the Wasps Rugby Club. Sparkes persuaded Roy that a career in civil engineering would be sensible. At that time Roy also met Deryck N de G Allen who was later to become his PhD supervisor at Imperial College. Allen was a student of Sir Richard Southwell who was developing numerical techniques for solving complex mathematical equations. The Consulting Engineers, Binnie, Deacon and Gourley had a commission to design the Dokan Arch Dam near Baghdad (which is still operational in 2012). They asked Allen for help so he and Severn took on the task and spent many hours with hand calculators grinding out solutions using a manual numerical relaxation technique.

In 1956, after National Service with the Royal Engineers, during which he served as a 2nd Lieutenant in Egypt, Cyprus and Aden, Roy was offered a Lectureship in Civil Engineering at Bristol. In the same year, the Institution of Civil Engineers set up an Arch Dams Committee. Roy was the most junior member and was allocated the task of developing numerical earthquake response analysis techniques. This was a turning point. He had already published a paper on what is now the ubiquitous finite element technique and he saw that it could be applied to earthquake calculations.

In 1984, he became a member of the Civil Engineering Committee of the Science and Engineering Research Council. Roy won the bid from that committee to set up a shaking table capable of testing large structural components and models with simulations of real earthquakes. Then, in 1990, the European Commission invited Roy to co-ordinate the large earthquake engineering facilities in LNEC (Lisbon), ISMES (Italy), Athens and Bristol in a joint programme to calibrate and improve the performance of shaking tables. This project put Europe's facilities amongst the best in the world. Roy continued to co-ordinate European laboratory-based earthquake engineering research until 2005 – some 10 years after his official retirement – leaving behind a thriving, world-class research community that continues to underpin improvements in global earthquake safety.

In 1981, he was elected a fellow of Royal Academy of Engineering and he won the Telford Gold Medal of the Institution of Civil Engineers. In 1992, he was awarded a CBE for services to Civil Engineering.

As well as his research, Roy insisted that the Professor and Head of Department should teach the basics, and for many years he lectured to the first year students in structures.

Roy was still working right to the end. His last big project was a book of the history of the Faculty of Engineering. He very generously funded its production and donated the royalties to the University to set up a scholarship fund for students.

He is survived by his wife Hilary, daughters Fiona and Elizabeth and his five grandchildren.

The Faculty of Engineering is organising a celebration of Roy Severn's life, to be held in early 2013, to which all will be welcome. Further details will be announced in due course.