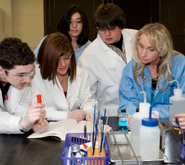 School pupils in Bristol who have been undertaking ‘real’ research into genes linked to arthritis and cancer as part of a new scheme that aims to engage students in science will be presenting their findings at a conference next week [17 Dec].

School pupils in Bristol who have been undertaking ‘real’ research into genes linked to arthritis and cancer as part of a new scheme that aims to engage students in science will be presenting their findings at a conference next week [17 Dec].

The scheme, funded by a Wellcome Trust Society Award, aims to inspire the next generation of scientists by giving secondary school students an opportunity to work alongside academics and take part in original, innovative research. The students, under the guidance of a University of Bristol senior researcher and technician who help equip and set up a research project half a day per week, are then able to take part in projects in their own school.

Students from Cotham School in Bristol have been working with academics at the University’s Schools of Biochemistry and Social and Community Medicine to carry out research in genetics and cell biology to investigate the genes linked to arthritis and cancer — both diseases associated with chronic inflammation.  To help them carry out their studies, the students have been using translucent zebrafish larvae to allow them to visualise how cells interact.

The students will be presenting their findings at the inaugural Authentic Biology Research Symposium 17 December along with other members of the scheme who have been working on areas such as genes linked to cardiovascular disease, diabetes, Alzheimer's disease and the evolution of the eye.

Clare Matterson, Director of Medical Humanities and Engagement at the Wellcome Trust, said: “In the research world, scientific conferences provide the platform for scientists working in different places to present and share their findings. Based on this concept, the inaugural Authentic Biology Research Symposium will give students the opportunity to present their work, as young researchers, learn new skills and experience a formal scientific meeting environment.

“We’re delighted that the project has expanded and more students now have the opportunity to take part in this innovative collaboration. The Wellcome Trust has a long-standing interest in science education and is committed to helping make inspiring, high-quality science education available to all young people.”

Originally initiated four years ago by Dr Dave Colthurst at the Simon Langton Grammar School for Boys and piloted through the Myelin Basic Protein Project (MBP2), the outreach scheme expanded with four more collaborations instigated this year between schools and the Universities of Bristol, Sheffield, Southampton, London and Queen Mary.

Supported and guided by researchers from the School of Biosciences at the University of Kent, students from the Simon Langton Grammar School for Boys have been looking at the human protein Myelin Basic Protein (MBP), which is a major constituent of the myelin sheath, the insulating layer surrounding nerve cells in the central nervous system. They are studying the hypothesis that when this protein is modified in the myelin sheath, by the addition of phosphate groups to specific amino-acids (phosphorylation), then the structure of the protein alters. This then somehow triggers the immune system to send antibodies into the central nervous system to attack and break down the myelin sheath, which can lead to symptoms seen in conditions such as Multiple Sclerosis.

Over the past four years, the students have cloned the human gene for MBP and genetically engineered it into Saccharomyces cerevisiae, brewers' and bakers' yeast. Yeast cells have almost the same biochemical pathways as humans. The students have used this as a model for investigating what affects the structure of MBP.  They hope to publish their findings in a peer-reviewed science journal.

About the Wellcome Trust The Wellcome Trust is a global charitable foundation dedicated to achieving extraordinary improvements in human and animal health. It supports the brightest minds in biomedical research and the medical humanities. The Trust’s breadth of support includes public engagement, education and the application of research to improve health. It is independent of both political and commercial interests. www.wellcome.ac.uk