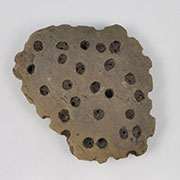 The first unequivocal evidence that humans in prehistoric Northern Europe made cheese more than 7,000 years ago is described in research by an international team of scientists, led by the University of Bristol, published today in Nature.

By analysing fatty acids extracted from unglazed pottery pierced with small holes excavated from archaeological sites in Poland, the researchers showed that dairy products were processed in these ceramic vessels. Furthermore, the typology of the sieves, close in shape to modern cheese-strainers, provides compelling evidence that these specialised vessels have been used for cheese-making.

Before this study, milk residues had been detected in early sites in Northwestern Anatolia (8,000 years ago) and in Libya (nearly 7,000 years ago). Nevertheless, it had been impossible to detect if the milk was processed to cheese products.

Researchers from the Organic Geochemistry Unit at the University of Bristol, together with colleagues at Princeton (USA), Łódź, Gdánsk and Poznań (Poland) studied unglazed pottery from the region of Kuyavia (Poland) dating from around 7,000 years ago.  These had been typologically interpreted as cheese-strainers by archaeologists for more than 30 years due to the peculiar presence of small sized holes on the surface of the sherds.  In fact, these archaeological sherds looked like modern cheese-strainers.

Using lipid biomarker and stable isotope analysis, researchers examined preserved fatty acids trapped in the fabric of the pottery and showed that the sieves had indeed been used for processing dairy products.  Milk residues were also detected in non-perforated bowls, which may have been used with the sieves.

Thus, the analyses of such a range of ceramics from the same area showed for the first time that different types of pottery were used in a specific manner, with sieves (and maybe bowls) being used for cheese-making, cooking pots for cooking meat and waterproofed bottles for storing water.

The processing of milk and particularly the production of cheese were critical in early agricultural societies as it allowed the preservation of milk in a non-perishable and transportable form and, of primary importance, it made milk a more digestible commodity for early prehistoric farmers.

Mélanie Salque, a PhD student from the University of Bristol and one of the authors of the paper said: “Before this study, it was not clear that cattle were used for their milk in Northern Europe around 7,000 years ago.  However, the presence of the sieves in the ceramic assemblage of the sites was thought to be a proof that milk and even cheese was produced at these sites.  Of course, these sieves could have been used for straining all sorts of things, such as curds from whey, meat from stock or honeycombs from honey.  We decided to test the cheese-making hypothesis by analysing the lipids trapped into the ceramic fabric of the sieves.

Peter Bogucki one of the co-authors of this new study and proponent of the cheese strainer hypothesis nearly 30 years ago notes that: “As well as showing that humans were making cheese 7,000 years ago, these results provide evidence of the consumption of low-lactose content milk products in Prehistory.  Making cheese allowed them to reduce the lactose content of milk, and we know that at that time, most of the humans were not tolerant to lactose.  Making cheese is a particularly efficient way to exploit the nutritional benefits of milk, without becoming ill because of the lactose."

The leader of the Bristol team, Professor Richard Evershed added: “It is truly remarkable the depth of insights into ancient human diet and food processing technologies these ancient fats preserved in archaeological ceramics are now providing us with!”

If you would like to learn more about similar research in which ancient biomolecules and isotopes has been used to shed new light on the past please visit 'The Palaeodetectives' and play the interactive science adventure!