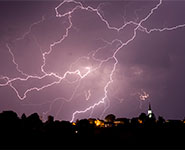 A new £2 million project, led by researchers at the University of Bristol, aims to better assess uncertainty and risk of natural hazards.

Led by some of the UK’s leading natural hazard scientists and statisticians, the NERC-funded project entitled CREDIBLE [Consortium on Risk in the Environment: Diagnostics, Integration, Benchmarking, Learning and Elicitation], will cover floods, windstorms, earthquakes, droughts, lahars and volcanic ash dispersal.

In recent years, worldwide economies have suffered devastating losses through natural hazards — Hurricane Katrina cost the US Government an estimated $105 billion and the Japanese tsunami cost an estimated $309 billion.   Global financial losses through natural disasters peaked in 2011. This study aims to create consistency and greater scientific rigour regarding the estimation of uncertainty in natural hazard risk assessment.

The first objective of the project will be to introduce statistical techniques that allow some of the uncertainty to be moved out of the margin for error and back into an explicit representation, which will substantially improve the transparency and defensibility of uncertainty and risk assessment.  So rather than relying purely on a risk manager’s experience regarding the amount of uncertainty present, the researchers will explicitly quantify contributions from different uncertainty sources, e.g. model and data.

The second objective will be to develop methods that allow the researchers to assess less quantifiable aspects of uncertainty, such as probabilities attached to future scenarios, e.g. greenhouse gas emissions scenarios or population growth projections.

The third objective will be to improve the visualisation and communication of uncertainty and risk, in order to promote a shared ownership of choices between actions, and close the gap between the intention to act such as, to build a levee or relocate a group of people living in a high-risk zone, and the completion of the act.  In natural hazards this gap can be large, because the cost of the act can be high, many people may be affected, and the act may take several years to complete.

Thorsten Wagener, Project Leader and Professor of Water and Environmental Engineering in the Department of Civil Engineering and a member of the Cabot Institute at the University of Bristol, said: “Ultimately, everyone benefits from better risk management for natural hazards, although the nature of the benefits will depend on location.

“In the UK, a primary hazard is flooding —this is an area of particular uncertainty, as rainfall and coastal storm surges are likely to be affected by changes in the climate. In the future, new hazards might emerge, such as the effect of space weather on communications. A key part of our project is to develop generic methods that work across hazards, both current and emerging.”

The £2 million grant was awarded by the Natural Environment Research Council (NERC) Probability, Uncertainty and Risk in the Environment (PURE) programme to fund the four-year project in collaboration with the Universities of Bristol, Exeter, Oxford and Lancaster.

The uncertainty framework developed by the CREDIBLE project will bring new approaches into the field of natural hazards and adapt them to the specific needs of this area.  The project will enhance capacity, knowledge and skills of stakeholders from private and public sectors, and improve societal security through better and more consistently informed decision-making under uncertainty.

NERC is the UK’s main agency for funding and managing world-class research, training and knowledge exchange in the environmental sciences. It coordinates some of the world's most exciting research projects, tackling major issues such as climate change, food security, environmental influences on human health, the genetic make-up of life on earth, and much more. NERC receives around £300m a year from the government's science budget, which it uses to fund research and training in universities and its own research centres.