Engineering academic elected a Fellow of the IEEE 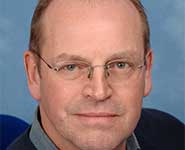 David Bull, Professor of Signal Processing in the Department of Electrical and Electronic Engineering, has been elected a Fellow of the world’s largest and most prestigious professional association for the advancement of technology.

Professor Bull’s work has been highlighted in the award, not just for its academic excellence but also because of its commercial significance.   His recent work in video compression has set new levels for quality and error resilience while his previous work is now being exploited widely, for example in wireless video products from University of Bristol spin-off - ProVision Communications.

Professor Nishan Canagarajah, Dean of Engineering, said: “The Faculty is delighted Dave has been elected a Fellow of the IEEE. This is an excellent achievement and we now have two IEEE Fellows in the Faculty.”

The IEEE has over 400,000 members in more than 160 countries and is a leading authority on a wide range of areas from aerospace systems, computers and telecommunications to biomedical engineering, electric power and consumer electronics.

An IEEE Fellow is conferred upon a person with an outstanding record of achievement in any of the IEEE fields of interest.  298 individuals have been elevated to IEEE Fellow in 2013.

Dedicated to the advancement of technology, the IEEE publishes 30 per cent of the world’s literature in the electrical and electronics engineering and computer science fields, and has developed more than 900 active industry standards.  The organisation also sponsors or co-sponsors nearly 400 international technical conferences each year.

The Institute of Electrical and Electronics Engineers (IEEE) is the world’s largest professional association dedicated to advancing technological innovation and excellence for the benefit of humanity. IEEE and its members inspire a global community through IEEE’s highly cited publications, conferences, technology standards, and professional and educational activities.

The University of Bristol’s Merchant Ventures School of Engineering in the Faculty of Engineering delivers world-class research and outstanding teaching via its three departments: Computer Science, Electrical and Electronic Engineering and Engineering Mathematics.

The Department of Electrical and Electronic Engineering is an active and successful centre of excellence in teaching and research, with in-depth specialisation in advanced communications technologies (power and spectrum efficient wireless access, image and video signal processing, photonics and quantum information) and electrical energy management. Much of the Department’s research is interdisciplinary, working with colleagues in the Engineering Faculty and in Applied Sciences.