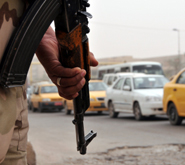 Research into the perception and visibility of private military and security contractors in war-torn countries such as Iraq and Afghanistan suggests that some Private Military and Security Companies (PMSC) contribute negatively to local communities, according to research at the University of Bristol.

Research into the perception and visibility of private military and security contractors in war-torn countries such as Iraq and Afghanistan suggests that some Private Military and Security Companies (PMSC) contribute negatively to local communities, according to research at the University of Bristol.

The three-year study, some of which has been published in Millennium: Journal of International Studies and discussed on BBC Radio 4’s Thinking Allowed programme, together with a Critical Impact Report (CIR) entitled 'The Politics of Profile and the Private Military and Security Contractor' recently referenced in the House of Lords, sheds new light on the largely closed social world of contractors in Iraq and Afghanistan.

Through a series of interviews [74] with contractors and field-research in the U.S, the UK and Afghanistan, the research provides an in-depth look at their self-image, professional practice and how they see others in the industry.

The study revealed British contractor’s unease at approaches to achieving security through intimidation that involved a readiness to use force, aggressive driving, the use of steroids and overall a high-profile ‘Rambo’ presence linked to those working principally for American PMSCs. These approaches were believed to exacerbate the insecurity of local populations who had already endured long experience of over-bearing, militarised masculinity and wished for a more considerate, peaceful presence.

The study’s findings suggest that although contractors play an important role working in extremely challenging conditions to contribute towards the wider security, it is discretion, modesty and humility rather than macho identities that are the key to success.

The study’s author, Dr Paul Higate, Reader in Gender and Security in the School of Sociology, Politics and International Studies based in the Global Insecurities Centre at the University of Bristol, said: “The findings from this research reaffirm long held sentiments out on the ground that restraint, consideration, understanding and a low-profile should be seen as hallmarks of professionalism, rather than their counter. There is a pressing need for industry wide mandatory training to help shift the mind-set of a significant number of U.S and UK veterans who see private security contracting as undifferentiated from soldiering.”

The Economic and Social Research Council [ESRC] and Arts and Humanities Research Council [AHRC]-funded project is entitled ‘Mercenary Masculinities Imagine Security: The Case of the Private Military Contractor’ and is part of the Global Uncertainties Programme.