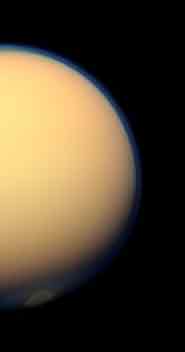 Recent image of Titan taken with Cassini's ISS camera showing the formation of a south-polar vortex. This vortex is formed by the seasonal change in the pole-to-pole circulation and has sinking air at its core, leading to increased temperatures and gas abundances over the south-polar region. These changes have been documented in detail for the first time using Cassini's Infrared Spectrometer, which allow us to better understand the processes occurring in Titan's exotic atmosphere. NASA/JPL-Caltech/Space Science Institute

Thanks to NASA's Cassini spacecraft, scientists including Dr Nick Teanby, have been able to observe for the first time ever the seasonal atmospheric circulation direction change on Titan – an event which only happens once every 15 years and is never observable from Earth. Their findings are published today in Nature.

Thanks to NASA's Cassini spacecraft which has been orbiting Saturn since 2004, scientists have been able to observe for the first time ever the seasonal atmospheric circulation direction change on Titan – an event which only happens once every 15 years and is never observable from Earth.  Their findings are published today in Nature.

Titan, while technically only a moon, is bigger than the planet Mercury, and is often considered a planet in its own right.  It is the only known moon to have a significant atmosphere and is one of only four terrestrial atmospheres in our Solar System (the other three being Earth, Venus, and Mars).  As Titan's rotation axis is tilted by a similar amount to that of the Earth, it experiences seasons in a similar way, but at a much more relaxed pace as Saturn takes 29.5 Earth years to orbit the Sun.

Dr Nick Teanby of the University of Bristol and colleagues used infrared spectra measured by Cassini's Composite InfraRed Spectrometer (CIRS) instrument to determine atmospheric temperature and global distributions of chemical tracers.   This allowed them to map out the seasonal changes in great detail.

The team observed an enormous increase in Titan's exotic trace gases over the south pole within a relatively short time.  These trace gases are produced high in Titan's atmosphere, where sunlight and highly energetic particles break down nitrogen and methane and recombine to form a vast array of more complex molecules like benzene and hydrogen cyanide.

Co-author, Dr Remco de Kok of SRON Netherlands Institute for Space Research said: "We were waiting for signs that the trace gas abundances would change together with the new season, but we did not expect such a large and rapid change: some gas concentrations increased more than a thousand times within only a few months.  Also surprising was that this was happening at altitudes above 450 km, much higher than initially anticipated."

At these high altitudes the atmosphere goes around the planet much faster than the rotation of Titan's solid surface and can have horizontal wind speeds around the planet of up to 200m/s (450mph).  Vertical winds caused by the seasonally varying hemisphere to hemisphere atmospheric circulation are much slower at a rather sluggish few millimetres per second and are hard to measure using conventional means.

Lead author, Dr Nick Teanby of Bristol's School of Earth Sciences said: "Using measurements of temperature and chemical tracers by Cassini, we were able to observe changes in the subtle vertical winds and reveal the pole-to-pole circulation cell.  For the first time ever, we observed the circulation cell direction reverse over the south pole around the time of the 2009 southern autumnal equinox.  The resulting distribution of gases shows that the circulation must extend much further than previously thought to 600 km or even higher.  This calls into question our current understanding of how Titan's atmosphere works and suggests new avenues to explore."

"Our results provide a powerful new constraint for atmospheric models of Titan.  Titan provides a natural laboratory for an Earth-like atmosphere in the cold outer solar system.  So, these results could eventually lead to a more complete understanding of atmospheric processes on Earth, other Solar System planets, and the many exoplanetary systems now being discovered."

In the coming years Cassini will continue to observe how the seasons develop.  Dr Conor Nixon at NASA Goddard Space Flight Centre said: "These results are giving us the first detailed look at changes occurring in Titan's atmosphere around the time of equinox, a season which has not been viewed up close by a spacecraft previously.  This shows the really great science that is coming out of the Cassini extended mission phases since 2008, and we look forward to seeing the further changes that will occur over the next five years until the end of mission in 2017."