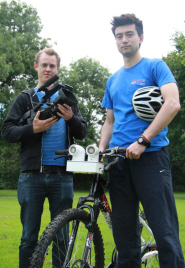 Navigating his way around a mountain bike course is the latest challenge to be tackled by blind University of Bristol student Dan Smith, as he puts ‘bat echolocation’ technology to the test for Richard Hammond’s new BBC television series.

Despite having only seven per cent vision, the 21-year-old had to navigate the mountain bike trail at Ashton Court as part of the Miracles of Nature programme, which was broadcast on BBC One last night [Monday, 12 November].

Dan, who is in his final year studying Aeronautical Engineering, hadn’t been able to cycle by himself since he lost his sight last year. Both he and twin brother Michael were struck down by Leber’s Optic Neuropathy, an extremely rare condition which leads to loss of vision as a result of the death of cells in the optic nerve, causing it to stop relaying vital information from the eyes to the brain.

Dan was approached to do the show after producers heard about a charity cycle ride he did with friends and family to Amsterdam last Easter – a feat which he and Michael achieved on tandem bicycles with fully sighted riders leading the way.

A standard mountain bike was fitted with the technology used in an UltraCane electronic mobility aid, which has copied the navigational abilities of bats to allow blind people to build a 'mind map' of their surroundings. It works by warning users of obstacles in their path and at head height through tactile signals received through the handles.

The prospect of cycling solo was both exciting and daunting, as Dan explained: “I was pretty skeptical at first, coming from an engineering background, but I was blown away by how effective the bat echolocation technology was.

“The handlebars vibrate if an object is close on your left or right, so I had to concentrate really hard. It was great to be able to independently ride a bike again. It’s another example of how technology is making the world more accessible to visually impaired people.”

Miracles of Nature is a three-part series in which presenter Richard Hammond investigates the extraordinary super-powers of the animal kingdom and finds out how a multitude of amazing creatures are inspiring inventions at the very forefront of science.

The second episode last night focused on super-senses found within the natural world, including how bats use echolocation to navigate in the dark and find food, sending out sound waves using their mouth or nose. When the sound hits an object, an echo comes back to help them locate it and this sonar principle is now increasingly being used in technology.