The evolutionary origins of our pretty smile 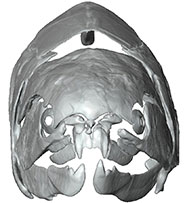 It takes both teeth and jaws to make a pretty smile, but the evolutionary origins of these parts of our anatomy have only just been discovered, thanks to a particle accelerator and a long dead fish. The research, led by the University of Bristol, is published today in Nature.

All living jawed vertebrates (animals with backbones, such as humans) have teeth, but it has long been thought that the first jawed vertebrates lacked pearly gnashers, instead capturing prey with gruesome scissor-like jaw-bones.

However new research, led by the University of Bristol and published today in Nature, shows that these earliest jawed vertebrates possessed teeth too indicating that teeth evolved along with, or soon after, the evolution of jaws.

Palaeontologists from Bristol, the Natural History Museum and Curtin University, Australia collaborated with physicists from Switzerland to study the jaws of a primitive jawed fish called Compagopiscis.

The international team studied fossils of Compagopiscis using high energy X-rays at the Swiss Light Source at the Paul Scherrer Institut in Switzerland, revealing the structure and development of teeth and bones.

Lead author, Dr Martin Ruecklin of the University of Bristol said: “We were able to visualise every tissue, cell and growth line within the bony jaws, allowing us to study the development of the jaws and teeth.  We could then make comparisons with the embryology of living vertebrates, thus demonstrating that placoderms possessed teeth."

Co-author, Professor Philip Donoghue of the University of Bristol’s School of Earth Sciences said: "This is solid evidence for the presence of teeth in these first jawed vertebrates and solves the debate on the origin of teeth."

Co-author Dr Zerina Johanson from the Natural History Museum said: “These wonderfully preserved fossils from Australia yield many secrets of our evolutionary ancestry but research has been held back waiting for the kind of non-destructive technology that we used in this study.  Without the collaborations between palaeontologists and physicists, our evolutionary history would remain hidden in the rocks.”

Professor Marco Stampanoni of the Paul Scherrer Institut said: "We performed non-invasive 3D microscopy on the sample using synchrotron radiation, a very powerful X-ray source.  This technique allows us to obtain a perfect digital model and very detailed insight views of the old fossil without destroying it.  Normally, our method delivers very high spatial resolution on tiny samples.  For this experiment we modified our setup and reconstruction algorithms in order to expand the field of view significantly while keeping the spatial resolution high."

This work was funded by the EU Framework Programme 7, the Natural Environment Research Council and the Paul Scherrer Institut.